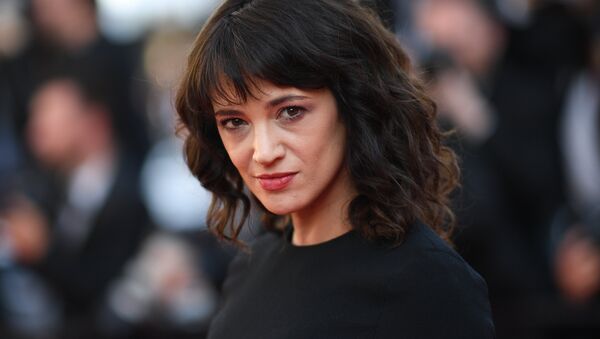 Earlier, The New York Times reported that the Italian actress allegedly paid hush money to Jimmy Bennett, who accused her of sexually assaulting him in a California hotel room in 2013, when he was 17 and she was 37.

Captain Darren Harris of the Los Angeles County Sheriff's Department (LASD) said in a statement that they are already in the know about media reports which name Italian actress and director Asia Argento "as being involved in an alleged 2013 incident" with the man.

The LASD's Special Victims Bureau "is attempting to reach out to the reported victim and/or his representatives in an effort to appropriately document any potential criminal allegations," Harris said without naming Bennett.

Harris added that the LASD has yet to located "any police report alleging criminal activity within our jurisdiction in relation to this incident.

The statement came as Benjamin Brafman, attorney of the embattled Hollywood mogul, described "the development" related to the Italian actress as something that "reveals a stunning level of hypocrisy by Asia Argento, one of the most vocal catalysts who sought to destroy Harvey Weinstein."

"The sheer duplicity of her conduct is quite extraordinary and should demonstrate to everyone how poorly the allegations against Mr. Weinstein were actually vetted and accordingly, cause all of us to pause and allow due process to prevail, not condemnation by fundamental dishonesty," Brafman said in a statement obtained by Sputnik.

Earlier this week, The New York Times reported that in April 2018, Argento ostensibly paid $380,000 to actor and rock musician Jimmy Bennett who was two months past his 17th birthday at the time of the alleged encounter with the Italian actress. The legal age of consent in California is 18.

42-year-old Argento became a leading figure in the #MeToo movement, which was established after more than 80 women, including Gwyneth Paltrow and Angelina Jolie, came forward with allegations of sexual assault against Weinstein since the New York Times claimed in October 2017 that he had allegedly paid off women who had accused him of sexual assault since the 1980s.