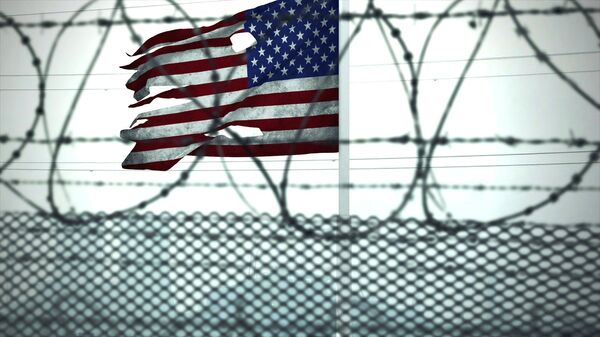 Prisoners in 17 US states are striking on Tuesday, August 21, on the anniversary of the death of Black Panther prison organizer George Jackson. Inmates are engaging in work stoppages and hunger strikes, among other methods, in a bid to push for better conditions, more rights and an end to prison slavery.

The strike will continue until September 9, the anniversary of the 1971 uprising at the Attica Correctional Facility in New York.

A prisoner who helped organize the strike told Sputnik News in April that they're looking to dismantle the "prison industrial slave complex." He is incarcerated at Lee Correctional Facility in South Carolina, which on April 15 saw the deadliest event in US prison history in the past 25 years. Seven people were killed and more than 20 were injured during the revolt. The strike is meant to protest that violence, as well as poor living conditions in US prisons and the practice of slave labor there.

The 13th Amendment to the United States Constitution abolished slavery — at least that's what most Americans think. In reality, it forbade "slavery [and] involuntary servitude, except as a punishment for crime."

That means that in effect, slavery is an ongoing phenomenon in America. Prisoners make all kinds of goods, typically for a rate spanning between zero and a few dollars a day. License plates, textiles, Starbucks coffee cups and many consumer products of are made, at a subsidized rate, often for large corporations, by prisoners. California's detained workforce has more than 2,000 inmates battling wildfires, including almost 60 minors. They're making $3 a day as they risk their lives, yet are also forbidden from joining fire departments after their release.

Karen Smith of the Incarcerated Workers Organizing Committee (IWOC), a group formed in 2014 "as a result of the prison organizing that's been going on since 2010," by formerly incarcerated members of the Industrial Workers of the World (IWW) union, spoke with Sputnik News on the eve of the strike.

"It became apparent to the IWW that this struggle that incarcerated, working-class brothers and sisters were engaged in was our struggle, and needed a cohesive group to address its needs and to organize alongside them," she said.

Groups including IWOC, the Free Alabama Movement, Jailhouse Lawyers Speak and Fire Inside have been working with prisoners to organize the strike, which forced all 11 prisons run by the New Mexico Department of Corrections into lockdown Tuesday afternoon.

At the Hyde Correctional Institution in North Carolina, three prisoners were designated as strike organizers and are "facing threats of administrative repression," IWOC said in a statement.

"Retaliation comes in the form of physical abuse, restricted movement, getting sentenced to solitary confinement — getting your status changed; here in Florida it's called ‘closed management,'" Smith told Sputnik. "Many people who were at the forefront of the prisoner resistance movement here in Florida were labelled a ‘security threat group' and placed in closed management," she said before the strike.

"Some of them have been set up with knives and cellphones placed in their belongings, or near them in their dorm, and now are placed in closed management for a year and a half, meaning solitary confinement. Restricted commissary. Phone calls, maybe once a week. They only get to shower at very limited times. And they get taken out one hour a day, if that even happens. I get tons of reports that that doesn't happen. Or, they go to a slightly larger cage, or a small yard, for an hour before they get put back into confinement. People have lost their visitation [rights]; I've lost my visitation rights. People's personal property is taken, which is, you know, huge when all you have is the photos of your family — the case that you might be in the middle of working on, which so many incarcerated people are — fighting for freedom."

He began by noting the "restrictions" placed on prisoners and the "collective punishment" prison officials hand down over individual infractions. He bemoaned that prisoners are "being warehoused" with "no movement."

"All they see of their former lives," Smith said, "is the sky."

"To get outside and to have sunshine and fresh air, that is a minimal human right," she said. "And movement already being restricted to a dorm, or a nine by seven cell, for a year and a half, that does immeasurable damage to a person. It also feeds into the dehumanization that the system relies on: breaking people down, separating them from each other, isolating them. People who are already marginalized, already isolated in a lot of ways."

When it comes to criminals, "it's easy to sweep their needs aside."

Americans consider them "less than, this sort of subhuman status that criminals have in our society. The fact that there's so many of them, people with felony convictions, I think now it can't be ignored. This label, ‘criminal,' has been used to oppress and exploit people since the dawn of this country and before that, definitely since the end of slavery in our country," Smith told Sputnik News.

The strike also calls for the rescinding of three pieces of legislation passed in the 1980s and 1990s that prisoners say rob them of proper channels to address their grievances and prohibit them from ever receiving rehabilitation and parole, thereby making them "sentenced to death by incarceration." The inmate Sputnik News spoke with said that part of what's causing tensions in prisons is people being handed "forever sentences" over petty offenses.

Another listed demand calls for an end to "racial overcharging, over-sentencing and parole denials," noting that black people convicted of crimes against white victims are particularly targeted this way, especially "in southern states." Other demands call for more rehabilitation services and voting rights.

"Work stoppages are just one of the forms of direct action that prisoners engage in; the others being boycotts, sit-ins, hunger strikes. I think work strikes — it's a commodity that incarcerated people have access to. They're forced to work. So it's a leverage. The prison system relies on them for it to run," Smith said.

"One of the things we decided, is that part of this is to be work stoppages. What we know is that we have to figure out how to economically impact the system; we've got to that point," the incarcerated man said.

Prisoners are refusing to make telephone calls, which come at huge financial costs, and foregoing use of the commissary, which helps them eat enough food in the face of small portions served by the cafeteria. Prisoners complain of being extorted by commissary prices. According to prison reporter Brian Sonenstein of Shadowproof, a can of soup can cost more than $15.

"We feel that economic boycott, which is why we call for boycott as well through our strike, is more than enough and sufficient to make a serious statement. Usually during the month of August prisoners in certain states and counties already start boycotting anyways; it's just not publicized a lot," the prisoner at Lee said. "A lot of prisoners are refusing the little luxuries that we usually have here. We start to forsake those things. So this is one reason we definitely wanted to do it, because we feel like it's the next right step to take, the next right step to get prisons into the mindframe of stop spending, stop letting these people exploit our families, our friends and even ourselves. Stop exploiting us, because our money, our family, is what keeps the system going. It's all based on dollars. Everything at the end of the day is based on money. I wish I could say it was based on restorative justice, but it's not. It's based on money."

He added that boycotts "build up the collective struggle."

According to the inmate, the violence broke out after guards set up a "gladiator match" between inmates. Guards "watched the bodies pile up" from behind a fence, he said. As he understands it, it's "policy" in South Carolina.

"With the gang situation, in Florida, we see them shipping people to camps in order to stir conflict to ‘take care' of people," Smith told Sputnik News.

Traci Fant of the prison advocacy group Freedom Fighters Upstate South Carolina told local media that since the uprising, inmates at Lee "can't urinate or defecate in the toilet, because they have to drink the toilet water." One video posted to Facebook by the group shows inmates inside Lee complaining of the smell of urine and feces, and trash cluttering the hallways.

"At Florida State prison, which is right up the road where our death row is housed, prisoners in several wings in the confinement dorms, which are two-man cells, their toilets are controlled by a flush button that is on the wall at the end of their unit, which the officer has control of, and they use it as a punishment," Smith said. "They will not flush the toilets, and people are sitting their own feces and urine with hundred-degree temperatures in Florida for days."

In May, South Carolina officials responded to the uprising by instituting a drone surveillance system. The drones, equipped with night vision and heat-sensing capabilities, add to the already expensive security infrastructure, which includes two guard towers — constructed in part by inmates — at a cost of $237,000. It's difficult to understand why the drones are viewed as necessary at Lee, as the prison already had a $2.2 million camera system, also with night vision and heat sensing tech, that covers the entire prison.

"The response to that tragedy that left seven dead and so many injured was to ramp up technology to interrupt cell phone signals," Smith said. "That's their response to that tragedy; that's what they see as wrong with that situation: not the deaths, not the violence. That's status quo in the prison system. It's the fact that word got out about it."

​Smith noted the discrepancy in spending further: "You can't get food that is decent or even unspoiled, yet they have those rods for prisoners to walk around that will go off if there's a cellphone within distance. Major technology that's interrupting communication [is paid for], yet aspirin is their entire healthcare system at most."

She called on people to support the strike by spreading the word and contacting prison officials to complain. Currently, IWOC is holding call-in campaigns to do just that. "We need to change our culture," she said, "Here in Florida, we have a whole unique beast that we're fighting, where prison guards are actual Ku Klux Klan members, and it's not criminal for guards to boil people alive — those are what our headlines look like down here."

"Without outside support, the inside movement dies," she said. "They don't have a chance, because nobody is paying attention, and if we don't take it upon ourselves to pay attention and to contribute to the narrative — and the narrative is being shaped solely by prison administrators, and the people who profit off of prisoners. That narrative has been sold to use for decades, and it's time that we take it over and have it represent the actual needs of the people."