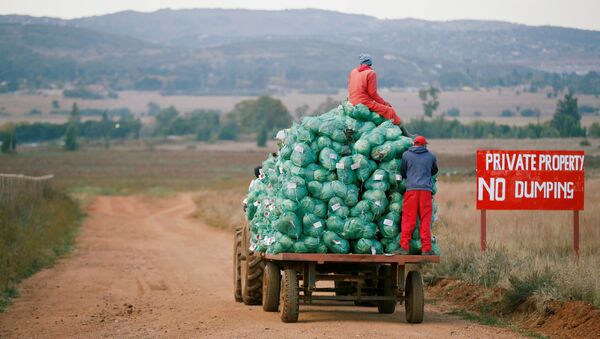 The Sunday Express reported, citing the head of the South African Agricultural Industry Association, that white farmers in South Africa are putting their land up for sale amid fears of land confiscation.

The land sales follow comments by the chairman of the African National Congress who has stated that the ruling party has been looking to seize properties exceeding 25,000 acres.

Radio Sputnik discussed the issue with Roger Southall, professor of sociology at the University of the Witwatersrand in South Africa.

Sputnik: What is your take on white farmers' approach to sell land in fear of potential expropriation? How workable is this approach?

Roger Southall: It's actually quite a complicated issue. It's a lot more complicated than was suggested by the Sunday Express, which I think is coming in from a particular angle. It's all sorts of issues which are wrapped up together. Certainly, the statement by the ANC president and the president of the country, Cyril Ramaphosa, that the party is going to press ahead with seizure of land without compensation, or the nationalization of land without compensation, has added to a sort of panic-stricken atmosphere in some quarters. There're various ways of looking at his statements or those of Gwede Mantashe.

It's partly about keeping some of the party membership happy; but at the same time, Cyril Ramaphosa is one of the architects of the constitution and I think a rational way of looking at it is that, on the one hand, he's trying to keep the party happy but, on the other, he is trying to keep to constitutional lines. He is trying to play a narrow line between keeping the party happy and also making sure that the whole issue about the expropriation of land without compensation is done according to constitutional norms.

Roger Southall: The constitution in section 25 does allow for expropriation of land in the national interest and expropriation of property in general. I think what the party is trying to do is to try and bring the whole land reform issue to the forefront by amending that to make it easier. A lot of people are actually saying, ‘You don't have to amend the constitution.' The basic problem which is happening in South Africa is that the ANC, the ruling party, hasn't paid sufficient attention to land reform over the last 20 years. And now there's sort of a built-up hunger for land among some of the membership; there's a lot of political pressure from another political party, the Economic Freedom Fighters, it's come to something of a head. I think everybody needs to keep cool heads in this situation rather than some of the alarmist headlines which have been brought forward.

Sputnik: I think a lot of people, especially in South Africa, would be thinking about the implications of the seizure of land and what effect it could potentially have on the economy; what's your take on that? What effect does this have on South Africa's economy?

Sputnik: What could be the resolutions to the land issue for the nation in general? This isn't a situation that has just started now, it's not a recent phenomenon, it's been going on for 20 odd years, it's probably just coming to a head now — but what reforms need to be introduced?

Roger Southall: As you're suggesting, it's not actually rocket science. First of all, there's quite a lot of unused land lying around, some of it belonging to the state, and that should be the first land that should be taken into public ownership. Then the government needs to pay far more attention to the way in which land reform is actually managed, and they have performed pretty dismally on this. Where they have set up black farmers on land, they have not provided the technical support, the capital backing and the legal basis for people to go and get private loans from the bank.