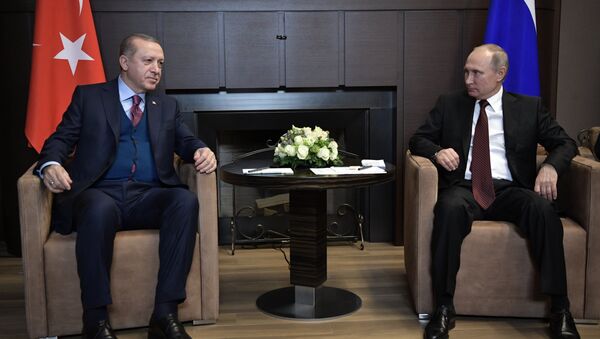 © Sputnik / Aleksey Nikolskyi
/
Go to the photo bank
Subscribe
Russia is poised to lift the visa regime for Turkish nationals holding official passports. This is what Turkey’s Foreign Minister Mevlut Cavusoglu said on Wednesday. The minister also stated that a Russian-Turkish working group will discuss the issue of Russia easing the visa regime for Turkish citizens in late August.

Sputnik discussed the significance of the move to lift visa regime for Turkish nationals with Dr Kerim Has, a professor at Moscow State University who specializes in Turkish and Russian politics.

Sputnik: What is the significance of the move to lift visa regime for Turkish nationals in terms of further normalization of once-strained Russian-Turkey relations? How achievable is complete restoration of trust between the two nations?

Dr Kerim Has: Actually it's a good step; Russia suspended its visa-free travel agreement with Turkey after the downing of the Russian jet by a Turkish F16 on November 24, 2015. At that time, the Russian side had enforced unilateral sanctions against Turkey, including restrictions on the import of Turkish agricultural products, activities of Turkish business in Russia and the tourism sector. On the other hand, the Turkish side at that moment did not take the same stance that Moscow did, and did not lift its visa- free travel regime for Russian tourists, but actually the sanctions affected virtually all areas of bilateral cooperation; both parties suffered significant economic losses. For almost two years, Russia's lifting of the visa regime for Turkish citizens has also been discussed in bilateral negotiations and the process of normalizing relations involves, first of all, lifting a series of sanctions and returning to the pre-crisis level of cooperation and even exceeding it.

However, this process has not happened yet as Ankara had expected: all of the Russian sanctions which were lifted during these two years were actually used as bargaining chip in relations with Turkey; Moscow removed them, step by step According to the cooperation with Ankara in Syria. Nowadays, in the shadow of tense US-Turkish relations and possible comprehensive military operations of the Syrian army with Russian air support in Idlib, it seems to me that the Russia side is signaling to Turkey that it cannot totally lift the visa requirements, but (it may) ease the visa application process for some Turkish nationals; particularly here we speak of Turkish businessmen, civil servants and truck drivers, and it's a bargaining process, and as I understand the final decision hasn't been taken yet.

Even if the visa-free regime is likely to be enforced soon, it will be for three categories of Turkish passports and it will not include all Turkish nationals. On the other hand, as we know, all Russian nationals may travel to Turkey without a visa for a 3-month period, but we have not yet (established) a reciprocal agreement on a visa-free regime, and I think it will not be a return to the pre-crisis level in relations yet.

Sputnik: What about the progress on removing sanctions? Russia previously did purchase quite a lot of Turkish agricultural goods, and can you comment also on the impact that those sanctions have had so far on both countries really?

Dr Kerim Has: Actually it's a good step, I don't want to undermine the situation, but for almost two years Russia's lifting of the visa regime for Turkish people has been discussed in bilateral relations and a concrete step was not taken till that moment. But when we take into account the tense US-Turkey relations and, as you know, it recently spoke about a military operation in Idlib, so for the Russian side it's a good moment to bargain this process, this visa regime process with Turkey, to diminish the possible reaction of the Turkish authorities against an operation in Idlib, so that's how I interpret the situation.

Sputnik: What do you think about readiness for trade in national currencies with Russia? President Erdogan had earlier expressed that he was ready to discuss (bilateral trade) with Russia, China and Iran, is that something that could become a reality in the near future?

Dr Kerim Has: Actually I don't think it will be a reality in the near future because the trading in national currencies is a complicated issue. It has also been discussed for more than a year between the two countries, but on the other hand this balance in trade relations is quite important, in this case. For example, Turkey exports approximately $25 billion to Russia and on the other hand, Russian's exports to Turkey exceed $18 billion, so Russia would have a Turkish lira surplus in its trade with Turkey if the national currencies will be taken into account.

So in this situation, taking into account this balance in trade relations between the two countries, I think that even if the implementation of national currencies in trade relations will be [adopted], it will be partially for some selected areas, for example, for maybe agricultural products, maybe for some textile products and so on. But on the other hand, we should also take into account the agreement on (the delivery of) petroleum and Russian natural gas to Turkey, because all of the oil and natural gas agreements are based in dollars, so it will not be that easy to change all the contracts to Turkish currency or Russian rubles, and it will take some time for both countries to implement a total change in bilateral trade relations in national currencies.

000000
Popular comments
The mutual advantages of Turkish Stream cannot be over-stated. In time, a Russian naval base on the shore of the Sea of Marmara? Why not? The Russian Federation has more to offer the Turkish people than the retards and the Doctors of Metaphysics in Brussels.