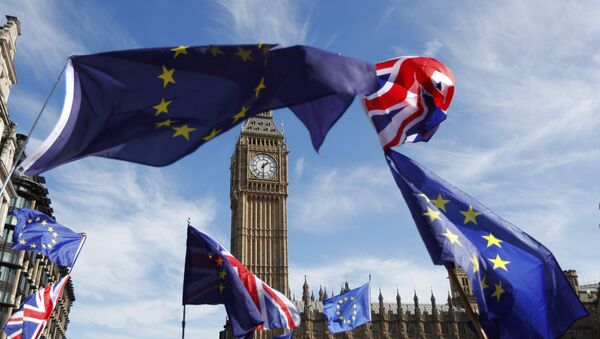 © REUTERS / Peter Nicholls
Subscribe
International
India
Africa
A British cabinet member has said top European officials are aware a “hard Brexit” would significantly impair the quality of life for most households across the European continent, and that Brussels appears to understand a bad compromise on Brexit would be better than a good trade deal and diplomatic rift.

Kristian Rouz — A member of the British cabinet says the European Commission has a clear understanding that the UK's separation from the EU without a trade and investment deal will have damaging effects on the bloc's economic health. This comes despite the Commission's lack of flexibility in the ongoing Brexit negotiations.

UK Business Secretary Greg Clark — who is seen as one of the most avid Remainers in the cabinet of Prime Minister Theresa May — said European officials are under pressure to soften their approach to the Brexit talks.

Secretary Clark stressed Brussels has acknowledged striking a deal with the UK would be a mutually beneficial development — yet, the EU is continuing its campaign of attrition against London in the hopes of extracting greater concessions in the ongoing discussions.

"My discussions across Europe have demonstrated how clearly it is in everyone's interest that an agreement is reached quickly and a no deal is avoided," Secretary Clark said. "The commission has a responsibility to all the people of Europe to respond positively and constructively."

The minister made his remarks after a tour of European capitals, where he tried to rally support among European leaders for the UK's Brexit plan — which in turn has been seen as too "appeasing" to the EU by hardline Brexiteers in Westminster.

Secretary Clark said his trip revealed that Europeans understand a "hard Brexit" would disrupt not only the economic ties between the UK and the EU, but medical ties as well. The UK is a major provider of medical services and pharmaceuticals to the EU market, meaning a "no deal" Brexit would hamper quality of life across the EU.

Adding to the concern on the continent, the UK's big pharma has warned that British-made medicines — from contact lenses to pills to medical equipment — could become much less affordable for European customers in the event of a "hard Brexit."

"There comes a time where you have to put the negotiation to one side and think about what is the impact on patients here, and you need to do something," Mike Thompson of the Association of the British Pharmaceutical Industry said. "I'm concerned about patients across the continent of Europe because I think it will have an impact for everybody."

On the other hand, UK smokers could breathe a sigh of relief after a "no deal" Brexit, as the EU owns the copyright to all the gruesome images printed on cigarette packets. It is unclear whether the post-Brexit UK would uphold the stringent anti-smoking policies commonplace across the EU.

Meanwhile, the UK's foreign secretary has said the UK would undoubtedly survive and prosper after even a "no deal" Brexit. He stressed the EU would be making a big mistake if it allowed the faltering Brexit talks to fall apart due to Brussels' insistence on very insignificant provisions of the existing EU agreements.

Prospect of No-Deal Brexit Scenario Over 50% as UK Keeps Changing Demands - Prof
Secretary Hunt also stressed a "hard Brexit" would cast a shadow on the prospect of a longer-term cooperation between the UK and the EU, as trade and diplomatic friction is likely to arise immediately after Brexit takes effect next March in such a scenario.

The deliberations come amidst a batch of solid macroeconomic data released this week by the Office for National Statistics (ONS) and several industry groups. Some have said the so-called "Project Fear" — a hardline-Tory term for media reports advocating against Brexit — is gradually failing apart.

The ONS said the UK's global trade expanded by a record £616 billion over the past year, and exports of goods alone rose 13 percent — and international customers are expecting even deeper trade cooperation with Britain once it's out of the EU.

As the EU is ramps up its pressure on PM May — or "Theresa the Appeaser," as hardline Tories and UKIP have labeled the prime minister — it is unclear whether the Tory cabinet is willing to go increasingly pro-EU in its stance on Brexit without risking a cabinet overhaul.