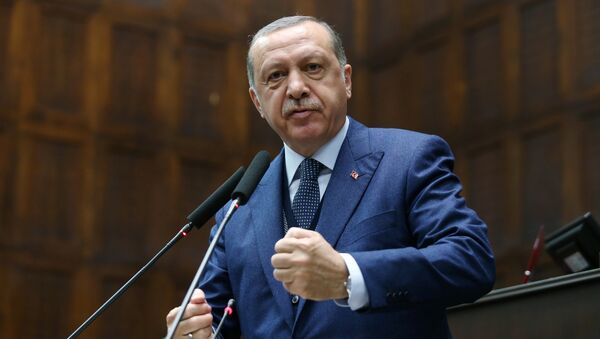 Speaking at a congress of Turkey's ruling Justice and Development (AK) Party in Ankara, President Recep Tayyip Erdogan specifically referred to "some" who he said "are threatening us with the economy, sanctions, exchange rates, interests and inflation."

The statement came in an apparent nod to the US amid a row over sanctions imposed by Washington in connection with the detention of American pastor Andrew Brunson.

"We are telling them: we've seen your games, and we are challenging you. We did not and will not surrender to those who act like a strategic partner but make us a strategic target," Erdogan underscored.

He insisted that using exchange rate, those people tried to stage an economic coup in Turkey and ensnare it.

"You will not prevent the achievement of our goals," Erdogan said, adding that Turkey would never bow before those "who set up their own order by exploiting the world."

Earlier, the Turkish President announced that his country will boycott US electronic goods and that the "economic blockade", which his country has faced, was in fact a continuation of the July 2016 coup attempt. According to him, there were no economic reasons behind the recent devaluation of Turkish lira.

"What happened to the lira has nothing to do with the economy and the crises that we had before… Our economy is healthy, it stands and will stand firm. The exchange rate will return to reasonable indicators in the near future," he said.

His remarks came after Turkey's Finance Minister Berat Albayrak said earlier this week that Ankara is ready to roll out an "action plan" to respond to a record plunge in the Turkish lira's value amid the ongoing crisis in Turkish-US relations.

Earlier, Erdogan blamed those who want to "make Turkey surrender in all areas, from finance to politics," saying that the country is "once again facing a political, underhand plot" and that "with God's permission, we will overcome this."

READ MORE: US to Slap New Sanctions on Turkey if It Refuses to Release US Pastor- Treasury

Separately in his op-ed in the New York Times, Erdogan warned that "unless the United States starts respecting Turkey's sovereignty and proves that it understands the dangers that our nation faces, our partnership could be in jeopardy."

Threatening to "start looking for new friends and allies", Erdogan demanded that Washington should "give up the misguided notion that our relationship can be asymmetrical and come to terms with the fact that Turkey has alternatives."

Trump Increases Tariffs on Steel and Aluminum Imports From Turkey

Erdogan spoke after US President Donald Trump tweeted that he had authorized a doubling of tariffs on steel and aluminum imports from Turkey, also praising "the very strong dollar" against the backdrop of the Turkish lira's collapse.

The exchange rate of the lira plummeted more than 16 percent against the US dollar, reaching an all-time low following Trump's announcement.

World
US Contradicts Its Alliance With Turkey on Fundamental Security Issues – Ankara
Washington earlier imposed sanctions against Turkey's Minister of Justice Abdulhamit Gul and Minister of Interior Suleyman Soylu for participating in the detention of US pastor Andrew Brunson, who is suspected of being connected to the Fethullah Gulen movement. Gulen is in turn accused of orchestrating the failed 2016 military coup in Turkey.

With Washington claiming that Brunson was jailed unlawfully, Ankara vowed to freeze the US Justice and Interior Secretaries' assets in Turkey in retaliation for the sanctions.