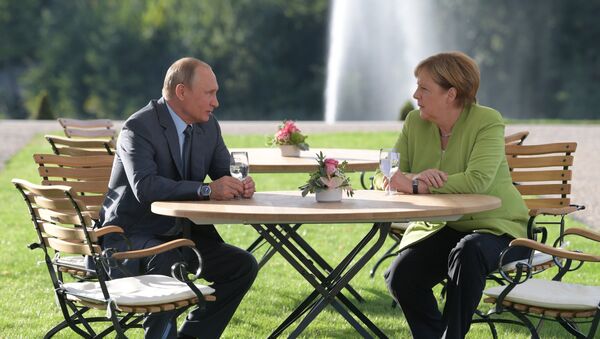 In an unusual format, the leaders made statements to the press prior to the meeting. As the Kremlin clarified, such decision was made because addressing media late on Saturday would have been "inconvenient."

German Tabloid Sees 'Hidden Meaning' in Putin's Bouquet for Merkel
According to the Kremlin spokesman Dmitry Peskov, the three-hour negotiations between Russian President Vladimir Putin and German Chancellor Angela Merkel were substantiate and the two leaders have "synchronized watches" on a number of issues.

"The negotiations were very long. That was a very substantiate, detailed discussion of the issues that were mentioned in the statements of the president and the chancellor [made before the talks]," Peskov told reporters on Sunday.

"There was no goal to reach any agreements. That was a well-timed useful discussion on synchronization of watches on a number of urgent issues," Peskov said.

Dmitry Peskov said that during the talks with Angela Merkel Vladimir Putin reaffirmed Moscow's commitment to continue its work with the German business.

"[The parties] discussed the need to boost the civil society dialogue, the Petersburg dialogue. [Putin and Merkel] reaffirmed mutual interest for such a format. Putin also said that Merkel had supported his position on the importance of scientific exchanges including in the high-tech spheres. The parties showed high interest for activation of contacts in this sphere," Peskov told reporters.

Kremlin spokesman also stressed that Merkel and Putin have discussed on Saturday the bilateral relations and pointed out the growth of trade between the countries.

"[The parties] discussed the bilateral relations and were glad to see the positive dynamics in trade. Last year we registered a significant [trade] growth by 23 percent. The trend remains in place this year," Peskov said.

Nord Stream 2 Pipeline Project "Must Not Be Politicized"

Vladimir Putin and Angela Merkel agreed during the Saturday talks that the Nord Stream 2 gas pipeline project was profitable and competitive as well as expressed their intention to complete it, Peskov said.

"[The parties] discussed big projects including Nord Stream 2. [Putin and Merkel] pointed out the commercial nature and competitive advantage of this project. Both Putin and Merkel agreed that it was not right to somehow politicize this project," Kremlin spokesman Dmitry Peskov told reporters.

Nord Stream 2 Financing Won't Depend on US Sanctions – Venture Executive
Peskov pointed out that Putin and Merkel discussed possible US sanctions against the Nord Stream 2 project.

"There is a general understanding that the projects is commercially profitable and competitive and that is why it is necessary to take measures to protect it from possible attacks… of third parties and to complete the project," Peskov said.

The spokesman also noted that Putin and Merkel had also discussed the transit of Russian gas through Ukraine.

"We have discussed prospects of gas transit through the Ukrainian territory," Peskov added.

Nord Stream 2 is a joint venture of Russian energy giant Gazprom and France's Engie, Austria’s OMV AG, UK-Denmark’s Royal Dutch Shell, and Germany's Uniper and Wintershall. The pipeline will run under the Baltic Sea from the Russian coast to a hub in Germany, and have an annual capacity of 55 billion cubic meters. The pipeline is expected to be put into operation by the end of 2019.

Dmitry Peskov said on Sunday that Vladimir Putin and Angela Merkel expressed their regrets over the stalled implementation of the Minsk agreements on the settlement of the conflict in eastern Ukraine.

"[The parties] exchanged opinions about the situation in Ukraine. [Putin and Merkel] expressed regrets that the implementation of the Minsk agreements had been totally stalled. Concerns over the unclear prospects of prolongation of the expiring law on the special status of Donbas, which is an important element of the Minsk agreements, has been raised," Peskov told reporters.

"[The parties] discussed the JCPOA. The situation around it is clear," Peskov told reporters without going into further details.

Moreover, the leaders have also touched upon the issue of the Syrian Refugees, Peskov said.

"[The parties] have thoroughly discussed the Syrian issue. Putin pointed out the intensifying flow of refugees returning home and called on the European countries to support the process to make it irreversible," Peskov told reporters. He also noted that Putin and Merkel had discussed the inclusive format of the Syrian reconciliation talks.

Russian President and German Chancellor also expressed their concern over some countries' unpredictable decisions to introduce tariffs, which may have a negative impact on the global economy, Kremlin spokesman said.

"[The parties] discussed international trade and economic relations and expressed mutual concern over unpredictable decisions, especially in the sphere of tariffs, taken by some states, which may finally have negative consequences for the whole system of trade and economic ties," Peskov told reporters.

China Strikes Back at US With Tariffs on American Goods - Commerce Ministry
In addition, Russian President Vladimir Putin and German Chancellor Angela Merkel discussed during the Saturday talks possible creation of the Russia-Germany-France-Turkey format of talks on Syria, Dmitry Peskov said.

"Such format has been discussed. [Putin and Merkel] decided that the dialogue in such a format would be launched at the level of expert and aides in order to upgrade the level of talks in the future," Peskov told reporters.