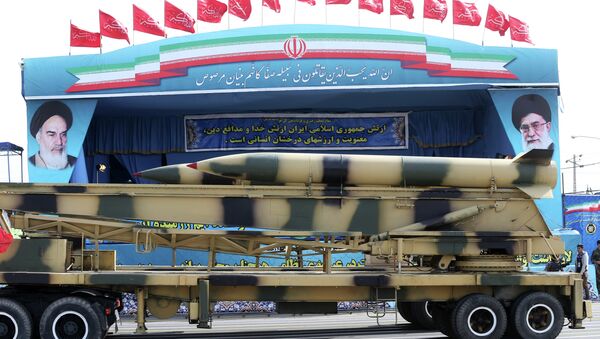 "We will present a plane on National Defence Industry Day, and people will see it fly, and the equipment designed for it,” Amir Hatami was quoted as saying by Fars news agency, Reuters reported.

The Islamic Republic News Agency reported Friday that Iran would also unveil a domestic version of the Russian S-300 surface-to-air missile system, dubbed Bavar 373, by March 20, 2019. Bavar 373 will become operational in the near future, as the project was reportedly progressing as scheduled according to sources.

World
Chinese FM Says Beijing Ready to Boost Ties With Iran Amid US Sanctions
Iran's deputy defense minister for international affairs, Brigadier Mohammad Ahadi, said earlier that military and economic power was essential for the nation's national security. Mohammad Ahadi stressed that the country's investment in the defense sphere was the lowest compared with neighboring states, but still provided security in the region.

The announcement comes amid the upcoming celebration of Iran's National Defense Industry Day on August 22 and an escalating political and economic standoff with the administration of US President Donald Trump.

Spanish Company Vows to Defy US Sanctions, Continue Business With Iran
In June, the US Department of State urged the petrochemical industry to stop buying oil from Iran by November to avoid US sanctions. The reinstatement of US sanctions against Iran follows Washington's announcement of its withdrawal from the 2015 JCPOA nuclear deal. In turn, the IRGC said they were prepared to disrupt other countries' oil shipments via the strait if Iran's exports were impeded.

Iran also reportedly conducted an anti-ship ballistic missile test last week for the first time in over a year. The missile test came days before Trump reinstated his first set of sanctions against the Islamic country.

Trump promised to ratchet up sanctions against Iran by November to target oil exports and banking after he pulled out of the JCPOA nuclear pact. Trump has claimed he can force Iran to sign a renegotiated deal that will also ban ballistic missile tests by Tehran.