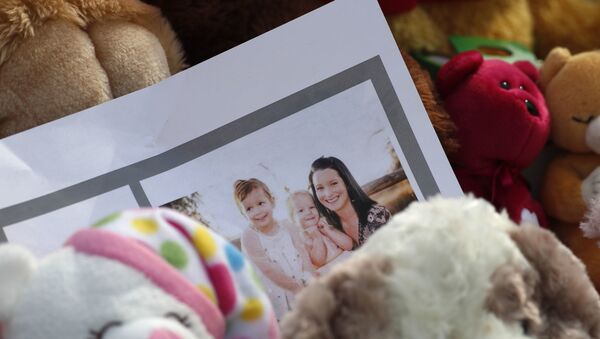 © AP Photo / David Zalubowski
Subscribe
The body of pregnant 34-year-old Shanann Watts was found Thursday on a property owned by Anadarko Petroleum, where her husband worked, the Colorado Bureau of Investigation reported. The police also discovered the bodies of their two kids, who had been submerged in crude oil for four days before being recovered.

The Colorado Bureau of Investigation announced Thursday that the authorities had found the body of 34-year-old Shanann Watts on the premises of Anadarko Petroleum three days after she was reported missing. Her husband, Christopher Watts, is accused of murdering her and their two daughters, Bella, 4 and Celeste, 3. Their bodies were also recovered Thursday after having been submerged in crude oil for four days, according to court documents.

Breaking: Chris Watts has confessed to killing his pregnant wife Shannan and two kids, says Shennan Watts’ brother and a person familiar with the search. pic.twitter.com/I8N5JuAS5X

​According to the Denver Post, the girls may have been strangled to death. As Denver's KMGH-TV reported, Christopher Watts might have placed the kids' bodies inside oil and gas tanks on his employer's property in order to hide the smell of the corpses.

Christopher Watts, 33, worked as an operator at Anadarko Petroleum, one of the largest oil and gas companies in the state. According to Anadarko, Watts had been fired on the day of his arrest. As the authorities noted, Watts is expected to face formal charges Monday. The house of Christopher Watts and his family is located near Frederick, Colorado about 30 miles north of Denver.

Law enforcement has not yet revealed information on a motive or the means of the murder. An investigation is currently underway and more testing is required to determine the cause of their deaths. The details regarding the evidence found is likely to be revealed next week.

MORE: Court documents show Chris Watts, and his wife Shanann, were scheduled to appear in court together later this month. Their HOA was suing them for $1,533.80.

Chris is now scheduled for his first court appearance re: murder of his wife/kids in 45min. @CBSDenver pic.twitter.com/YpYSK3mTf9

​The 15-week pregnant Shanann Watts and the girls were reported missing Monday after Shanann missed a doctor's appointment and didn't answer her phone. A friend called the police, who found her phone and belongings inside the house during a search.

Two days later, the FBI and the Colorado Bureau of Investigation joined in on the search. Commenting on his wife's and kids' disappearance, Chris Watts told journalists he missed his family and hoped that law enforcement would find them.

Right now — a large and touching vigil for Shannan Watts and her daughters is happening outside their home. pic.twitter.com/PukK1O98TR

​On Wednesday, as the FBI and the Colorado Bureau of Investigation were brought in to help with the search, Chris Watts told reporters he was traumatized by the disappearance and was hoping for his family's safe return.