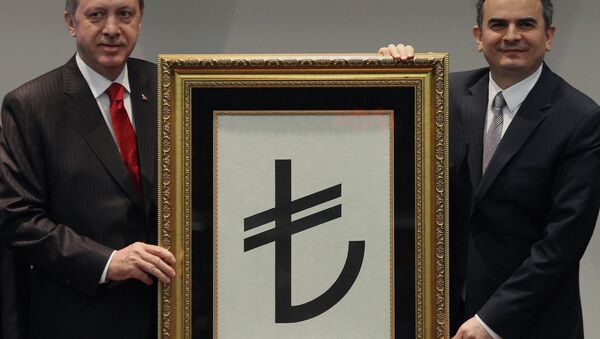 Credit ratings for Turkey under the current administration of President Recep Tayyip Erdogan have plunged sharply over the last 24 hours, as global financial services, including Moody's and S&P, have downgraded the largest economy in the Middle East to below investment grade, according to Bloomberg.

World
'We Won't Surrender': Erdogan Accuses US of Plotting 'Economic Coup' in Turkey

The new ratings drop puts Ankara in the same investment class as Greece, Fiji and Argentina, according to Bloomberg.com.

Deep drops in the value of the lira followed sanctions by the administration of US President Donald Trump on high-ranking members of Erdogan's court, particularly over what are seen as the Turkish president's human rights violations in the wake of a failed 2016 coup and, more recently, the detention of a US pastor.

The increasingly autocratic Turkish leader has taken steps to suggest that the US sanctions and subsequent financial turmoil in the country are the result of an ‘economic war' promulgated by Trump.

"The weakening of the lira is putting pressure on the indebted corporate sector and has considerably increased the funding risk for Turkey's banks," S&P said in a statement, cited by Bloomberg.

"Despite heightened economic risks, we believe the policy response from Turkey's monetary and fiscal authorities has so far been limited," the financial services company asserted.

"We forecast a recession next year," a spokesperson for S&P stated, adding, "inflation will peak at 22 percent over the next four months, before subsiding to below 20 percent by mid-2019." cited by Bloomberg.