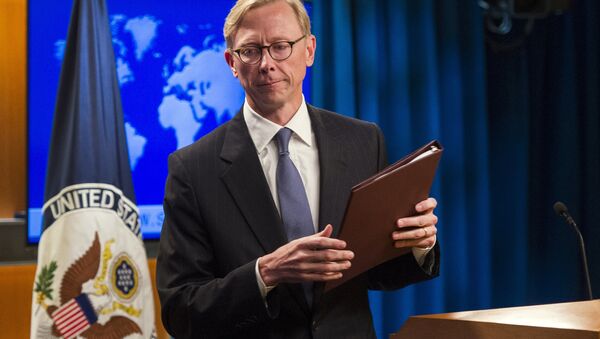 Brian Hook, the newly-appointed head of the Iran Action Group, has worked on Iran throughout his career beginning in 2006 at the UN Security Council. Unlike his former chief, Rex Tillerson, Hook appears to maintain a hawkish approach to Tehran, similar to that of his present boss, Mike Pompeo.

Brian Hook, the State Department's director of policy planning, has taken the helm of Mike Pompeo's Iran Action Group aimed at changing the Iranian government's "behavior."  According to observers, he is the man for the job.

At the beginning of Donald Trump's presidency, Hook played a prominent role in the team of former US Secretary of State Rex Tillerson. According to Foreign Policy magazine, Hook participated in decision-making on virtually all important foreign policy issues and supervised Washington's discussions with the EU on the Joint Comprehensive Plan of Action (JCPOA), commonly known as the Iran nuclear deal.

The media outlet highlighted that unlike most aides who were ousted following Tillerson's "unceremonious firing" by Donald Trump, Hook was asked to remain through the transition period.

World
US Unveils 'Iran Action Group' for Post-Nuke Deal Policy
The magazine underscored that some White House officials "urged" Mike Pompeo, nominated as the next secretary of state, to "keep Hook in place" due to the latter's expertise and strong working relations with the presidential staff, including Trump's son-in-law Jared Kushner.

Besides this, Hook is well acquainted with National Security Advisor John Bolton. During Bolton's tenure as the US ambassador to the United Nations (August 2, 2005 — December 31, 2006) Hook served as his senior advisor overseeing sanctions on Iran, among other issues.

The newly-appointed head of the Iran Action Group started his political career in the early 2000s while working for Iowa Governor Terry Branstad, the current US ambassador to China, and US Congressman Jim Leach.

Under the presidency of George W. Bush (2001-2009) Hook held the positions of assistant secretary of state for International Organization Affairs, senior advisor to the US ambassador to the United Nations, special assistant to the president for policy in the White House Chief of Staff's office as well as the position of a counsel at the US Justice Department.

During the 2012 presidential race Hook jumped on Mitt Romney's bandwagon as senior advisor on foreign policy. He is also known as a co-founder of the John Hay Initiative (JHI), "a volunteer network of over 250 foreign policy, defense, and intelligence experts who advise elected officials and candidates for public office." It was JHI leaders, who lambasted then presidential candidate Donald Trump in May 2016, claiming that he would "act in ways that make America less safe."

Hook's appointment to ex-Secretary of State Tillerson's team caught many by surprise as he had been largely regarded as a "Never Trumper."

Hook and the Iran Nuclear Deal

The other question is Hook's attitude to the much discussed Iran nuclear deal. Unlike his former boss, the Iran Action Group head appears to be rather skeptical about it.

"The Iran nuclear deal — however much they [signatories to the JCPOA] think it is keeping the peace — has prevented nations from taking action against the full range of Iran's threats to peace and security," Hook says, as quoted by The New York Times.

Analyst: US, Israel Formed 'Highly Professional Working Group' Against Iran
It seems that Hook is facing a number of challenges given Europe's antagonism to Trump's unilateral withdrawal from the deal and the resumption of sanctions against the Islamic Republic of Iran (IRI).

"We want to be very closely synchronized with our allies and partners around the world. This team is committed to a strong, global effort to change the Iranian regime's behavior," he told a press briefing on August 16.

When asked how he intended to persuade the international community to follow the US' suit given the Trump administration's sanctions and tariff spree that has hit many foreign businesses, Hook said that he and his team are going to continue holding talks with allies and partners across the world.

"The purpose of the sanctions is simply to deny the Iranian regime revenues to finance terrorism. That's the purpose of maximum economic pressure. The point is not to create any rifts with other nations," he said, announcing that the Iran Action Group's goal is "to reduce every country's import of Iranian oil to zero by November 4."

Switching From Dollar to Gold: Iran Continues Its Struggle With US Oil Embargo
Hook has made it clear that the group would implement Mike Pompeo's Iran strategy outlined by the secretary of state in his "12 requirements" in May 2018.

Under Pompeo's plan Iran has to withdraw from Syria, end Tehran's support for Hezbollah in Lebanon and Houthis in Yemen, halt development of nuclear-capable ballistic missile systems, release US citizens, and provide the International Atomic Energy Agency (IAEA) with access to all sites throughout the country.

According to Hook, the newly established group will not seek ways to mend fences with the IRI. Only if the government of Iran demonstrates "a commitment to make fundamental changes in its behavior," the US president will hold dialogue with Tehran "to find solutions," he emphasized.