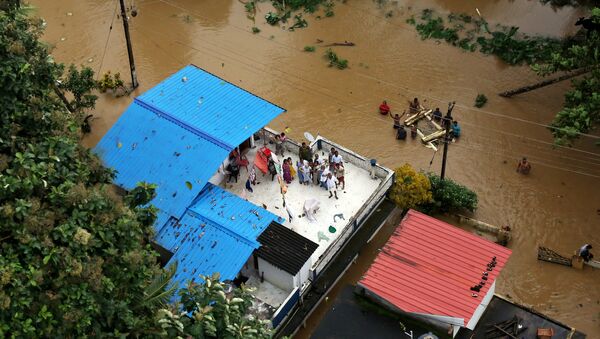 More than 200,000 people have been rendered homeless by floods caused by the opening of barrage gates in Kerala, India. Emergency mechanisms have been scrambled with the armed forces assisting the disaster management team. The meteorological department has predicted more rains for the state for the next 48 hours.

New Delhi (Sputnik) — According to the latest official figures over 167 people have lost their lives in floods in the southern Indian state of Kerala. The government of Kerala has requested more military helicopters, boats for the mass evacuation of those stranded in inundated areas.

The Indian Army, Indian Navy and the Air Force have deployed additional men and choppers in Kerala, apart from the troops and personnel of the National Disaster Relief Force (NDRF) already stationed there, Defense Minister Nirmala Sitharaman announced on Friday. More than 3,000 people have been rescued by the armed forces since the start of the operation.

According to official estimates, over 200,000 people have been displaced, and more than 10,000 km of roads and hundreds of homes destroyed or damaged across the state.

In a fresh statement, authorities said that Kochi Airport, one of the busiest in southern India, would remain shut till August 26.

"Kochi Airport operations are temporarily suspended up to 2:00 p.m. on August 26 due to very high flood situation and key essential facilities like the runway, taxiway, and apron are under the submerged condition," an airport statement said.

​Due to heavy rains, several dams including Asia's biggest arch dam Idukki have been opened to release excess water, further worsening the situation. All the shutters of the Idukki dam were opened last week for the first time after a gap of 26 years as water accumulated over the years had reached danger levels.

Many lives are lost each year in India during the monsoon season, but Kerala has not seen such devastating flooding since 1924.

"This is the worst monsoon disaster since 1924," Kerala Chief Minister Pinarayi Vijayan said on Tuesday.