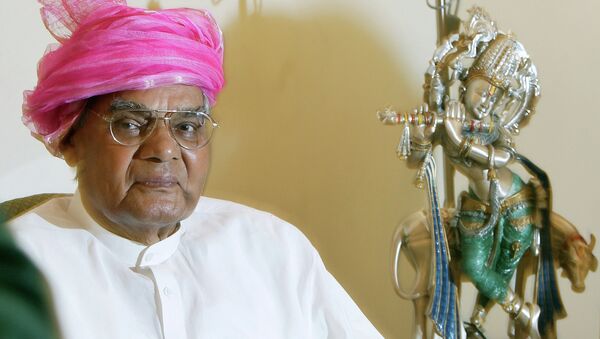 A sea of people from all walks of life have gathered outside the BJP headquarters in New Delhi to get a glimpse of the mortal remains of India’s three-time Prime Minister Atal Bihari Vajpayee who passed away on Friday at the age of 93. He is regarded as one of India’s most charismatic and visionary prime ministers.

New Delhi (Sputnik) — Delegations from various Asian countries, including Pakistan, attended the funeral of former Indian Prime Minister Atal Bihari Vajpayee in New Delhi on Friday. The funeral procession that began at 1:00 p.m. local time will culminate in the last rites set to be performed at 4:00 p.m. at the Smriti Sthal memorial site in the heart of the city.

Former Indian Prime Minister Dies at 93 - Reports
Atal Bihari Vajpayee was the first and only Indian prime minister to travel to Lahore in an effort to build bridges with Pakistan. In their tribute to the visionary leader, Pakistan did not forget to remind the present Indian establishment about Vajpayee's vision for SAARC (South Asian Association for Regional Cooperation) nations.

"Mr. Vajpayee was a renowned statesman who contributed to bringing a change in India-Pakistan relations and remained a key supporter of SAARC and regional cooperation for development," Pakistan's Foreign Affairs Ministry statement reads.

In 2016, following a series of terror attacks on Indian military camps, New Delhi pulled out of the SAARC summit and the grouping has not been able to hold an annual summit since then. Pakistan on Thursday once again said that it is ready to host a summit to make headway on regional matters.

Vajpayee passed away at the age of 93 following a prolonged illness on Thursday in New Delhi. Three-time Prime Minister Vajpayee — a right-wing leader having friends and admirers across party lines — was first sworn in as prime minister in 1996 and after less than two months in office, he shook the world by sanctioning three nuclear tests to establish India as a nuclear power.

Prime Minister Narendra Modi wrote an emotional blog for the departed leader, describing him as "guiding spirit, providing vision, cohesion, and direction to his people".