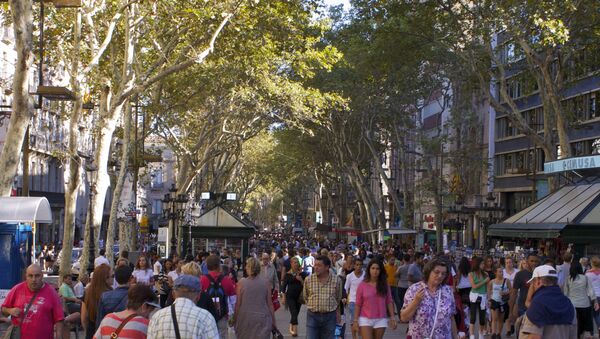 August 17 marks the first anniversary of the tragic events that took place in several Catalonian cities. With this in mind, Sputnik recalls the stories of those who suffered from these terrible attacks, putting an end to the happy life of so many innocent people.

Ian Moore Wilson, 75, died after being hit by the terrorist's van, while his wife, Valerie Wilson, who is now 77, was seriously injured.

According to José Vargas Rincón, President of the Catalan Association of Victims of Terrorist Organizations (ACVOT), the couple had arrived from Vancouver, Canada to visit their grandson who was practicing with the Barcelona football club.

"They were walking along Las Ramblas when the van appeared. The van hit Ian so hard that he was lifted off the ground and thrown against the sidewalk. The man hit his head and died almost immediately. As for the woman, the van ran over half of her body," he says.

Valerie suffered serious shoulder, arm and leg injuries. To this day she hasn't yet fully recovered from the consequences of the attack.

The organization helped her receive treatment at local hospitals before she returned to Canada.

A year since #17A there are two banners in #Barcelona today that some people won't want you to see. But I think they should be. 'The Spanish king is not welcome in the Catalan countries' & 'Their wars, our deaths. Catalonia in solidarity with the victims' also depicting Felipe VI pic.twitter.com/3cBOy75yfJ

Vargas also told Sputnik of Pablo Abecasis, a newsagent from Ramblas, who was injured in the attack. The van ran over his newsstand which resulted in the man suffering serious injuries.

"A terrorist attack means endless pain and suffering for its victims. The pain fades over time but these memories will always remain. It is an experience that each of the victims will always remember," he says.

Raquel González is one of the witnesses to the Barcelona attack. The woman shared her memories of August 17, 2017, in Barcelona with Sputnik.

"I started to understand the seriousness of what was happening when I saw people shouting and running away. I work in Pelai Street, which is near Las Ramblas. You need to walk along Pelai to get to Las Ramblas," she explains.

"Their wars, our deaths. #Catalonia in solidarity with the victims", says a banner in the Rambla of #Barcelona. #17A #BCNciutatdepau pic.twitter.com/1mZ2OFLkcr

​Raquel saw the terrorist van on the security camera of the pharmacy where she works. The car went down the street just at the time the girl was working. A minute later the attack occurred.

"When we heard people shouting, nobody knew what had happened. Someone said it was a bomb, and there had been an attack. We realized that something serious had happened when we saw the police, ambulance and firefighters going to Las Ramblas," she recalls.

Raquel only learned what had happened when she got home and turned on the TV.

"They didn't let us leave the pharmacy and close it. They didn't let us out of Pelai Street. The police told us we couldn't leave; then we went in the opposite direction from where the attack had occurred," she explains.

There was no transport, so Raquel had to walk home, which took more than an hour.

The terrorist attack in #Barcelona took place exactly 1 year ago. Magnificent citizen response — supporting the victims, fighting against any threat of racism or panic — shows what we are capable of: we will always be the city to dream of a better future for all! 😘 #17August pic.twitter.com/dUeh16WF8X

​The woman asserts that she remembers perfectly what happened a year ago.

"It was horrible. The pharmacy I worked in was very close to the attack. I was scared to leave the house; I didn't know what might happen. The first few days I was afraid to go to work or to the city center. When I pass by the area of the attack I always remember that terrible day," Raquel concludes.

The attacks in Barcelona and Cambrils resulted in the deaths of 16 innocent civilians and eight terrorists; 152 people were injured.

Four terrorist cell members, Moussa Oukabir, Said Aallaa, Mohamed Hychami, Omar Hychami and Houssaine Abouyaaqoub, were killed in Cambrils; Younes Abouyaaqoub was killed in Subirats. Imam Abdelbaki Es Satty who is considered the mastermind of the operation, died in the explosion in Alcanar, along with Youssef Aalla, the brother of one of the detainees.

The attacks were claimed by Daesh*. Four people were arrested in connection with the attack; the investigation is still underway.