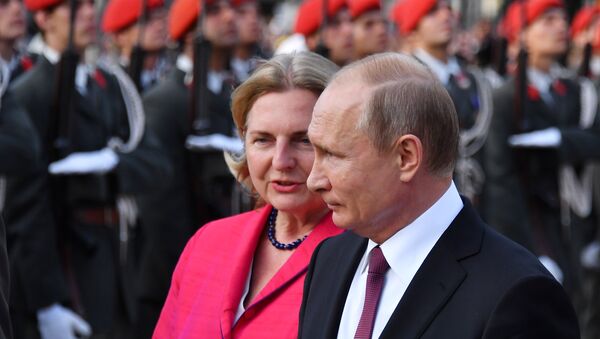 The foreign minister’s wedding that was originally planned for 20 guests has become "a story for more than 100 people with the arrival of a surprise visitor," the 36-year-old chef of Gasthaus Tscheppe an der Weinstrabe Heinz Preschan told the newspaper Kurier. This number includes not only the friends and relatives of the couple, including Federal Chancellor Sebastian Kurz and Vice-Chancellor Heinz-Christian Strache, but also ten Don Cossacks who will travel with Putin to deliver a musical greeting to the engaged couple.

Heinz also commented on the wedding menu, saying he had prepared "Styrian specialities such as apple liqueur and kernel oil," traditional for the Styria region where the wedding is to take place. He also noted that the menu would include organic fish, fresh meat and a vegetarian dish for the bride. When asked about his hopes for the wedding, Heinz responded with "that I don't do anything wrong. And a selfie with Putin."

Heinz disclosed the information about the safety protocols that had been taken before the wedding. The police, Cobra and other security officers were in checking the restaurant five weeks before the ceremony, so Heinz could no longer keep in a secret.

"Russian officers were here too, using drones," he added.

The Austrian Foreign Ministry has noted that Putin’s arrival would be regarded as a working visit, and the security measures would be similar to those typically applied during a visit of a foreign head of state. It has also said that Russia would cover the costs of Putin's visit.

Putin’s invitation has raised some eyebrows in Austria. Former Federal Chancellor Franz Vranitzky told the German newspaper "Bild" that the visit by the Russian president was a "strange process that fits both domestic and foreign and socio-political purposes." MEP from the Austrian party The Greens Michel Reimon has called on Kneissl to resign over Putin’s attendance at her wedding ceremony.

"That is primarily a private celebration and a private visit, which will have no impact on Austrian foreign policy positions," a ministerial representative told the APA news agency.

The wedding ceremony will be held in the small village of Gamlitz located in the south of Styria on Saturday. Karin Kneissl plans to hold talks with Russian President during the wedding Austria’s ORF broadcaster reported. After the ceremony, the Russian president will head to Berlin for a meeting with German Chancellor Angela Merkel to discuss the situation in Syria and Ukraine.