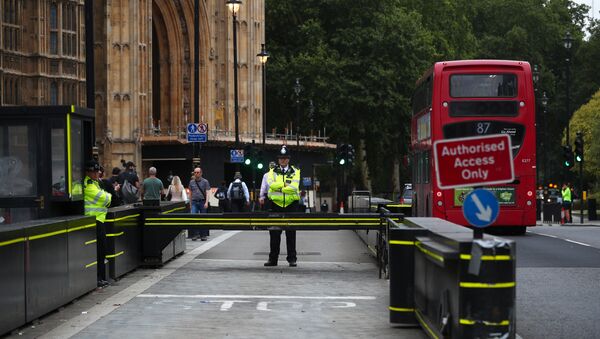 © REUTERS / Hannah McKay
Subscribe
The man thought to be behind Tuesday's terror attack on Westminster has been named as 29-year-old Sudanese immigrant, Salih Khater, according to British media reports. The suspect had been recently granted British citizenship after coming to the UK as a refugee in 2010.

Sputnik has discussed this with Hamed El-Said — Chair and Professor of International Business and Political Economy at the Manchester Metropolitan University Business School.

Sputnik: In this case, it seems that the suspect was not known to MI5 or counterterrorism police, what can you say about the implications of that situation? It seems that often times we hear that the police had the suspect on the radar and they were aware of this and in this case it is different, do you think this is a more dangerous situation when this person was not on the radar or does this mean that this is a different kind of crime?

Hamed El-Said: Yes and no. As you said rightly this person was unknown before to the MI6 or the MI5, but we know now that he's actually been known to the local police. We also know now that this person he hasn't really been outside. He's not, for example, joined any terrorist organization in Syria and Iraq. We also know that he was alone in the car, there is no other weapons that have been found in the car. We know he drove all the way from Birmingham, arrived in London at almost midnight, waited till  5-6 o'clock in the morning and last minute swept the car into a deserted area at the time when the parliament was in recess really, ahead of the daily rush hour, leaving the area relatively deserted.

Sputnik: We were getting reports at the beginning that he was not cooperating with the police has anything come out, has he said anything?

Hamed El-Said: We will know a lot about this individual, it is very difficult to hide his history, we know he's 29 years of age, as you reported, a British citizen of Sudanese origin. We don't know when he came. He's not cooperating, doesn't want to cooperate, he's probably under certain kind of drugs. We don't really know, there's still a lot of questions unanswered at this stage, but that's normal after such attacks because the police want to make sure that they get everything. They want to make sure that, actually, if there are other individuals involved in the attack they don't want them to know much about the operation. So it's very normal to have this kind of secrecy surrounding such attacks for a while, until everything is known and discovered about this individual and then we will know more, but so far really there's not much information available about this individual apart from what we've just said.

Sputnik: Some experts have pointed out that the suspect may not be linked, in fact, to any organization and this could just be a copycat crime that just for some reason that an amateur, somebody who didn't have any affiliation with terrorism decided to perpetrate, what are your thoughts on that, do you think this is a possibility?

Hamed El-Said: There is now, the literature has established a very strong link between crime and terrorism. A large number of individuals coming from a criminal background become terrorists along the way for many reasons, obviously, so they already have the qualifications, they are already trained in a similar area, crime scene or something. That in a sense makes them, obviously, more dangerous or equally dangerous to individuals who sometimes go to a battlefield like Syria, Iraq or maybe Afghanistan, train over there and come back.

Netizens Slam Tourists Taking Selfies Near Westminster London Ramming Site
Sputnik: There are reports that the Metropolitan Police were searching three addresses in the Midlands, anything about that you can tell us?

Hamed El-Said: Obviously, that's a very normal procedure. After any terrorist attack, you want to search for any place that the individual who committed the attack is linked to. Nothing has come out so far, as far as I know, but obviously, after the search has taken place, the Metropolitan Police will definitely provide more information. It's a matter of time, it's very difficult at the moment, you know.

Sputnik: Do you think that there needs to be more done in the way of assimilating and integrating people into society?

Hamed El-Said: The security forces almost all over the world, especially in western countries, today are far more equipped, far more trained, far more capable than ever before to foil terrorist attacks and they do.

In fact, as we heard today (on Wednesday) in one of the journalistic briefs from an official, the prime minister spokesman today, he's been very clear, he has stated that almost 18 attacks have been foiled since the last attack on Westminster in March in 2017 and he also added that almost 676 terrorism investigations are underway. So obviously, with regard to the first part of the question on security, the security has been enhanced tremendously, but it's also really erroneous to believe that no matter how good our security staff and system is we could literally prevent every single attack in the world. This is next to impossible. I don't really think we should even dream of doing that. That is not something achievable, and the fact that some individuals who are not well known to us is also normal, not everybody we know becomes a terrorist and that also adds to the argument I made earlier on. We still don't really know enough about the path to radicalization and that actually differs tremendously from one individual to another, from one group to another, and from one country to another as well.

So, therefore, the idea of investing more in preventing totally terrorism is actually a dream. It cannot be achieved and achieving it would require an enormous amount of resources. I doubt whether any country in the world can afford that. What we really need to focus on is just making sure that terrorism does not prevent us from doing our daily activities, our daily lives, practicing our daily lives.

The views and opinions expressed by Hamed El-Said are those of the speaker and do not necessarily reflect those of Sputnik.