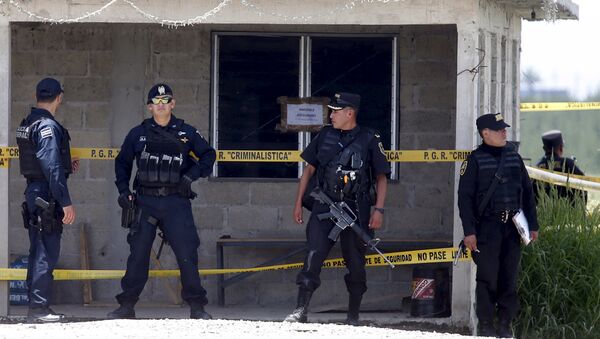 MEXICO CITY (Sputnik) - The US and Mexican governments are establishing a joint team that will be based in Chicago to investigate and target drug lords and cartel financing, Drug Enforcement Agency (DEA) Special Agent in Charge Brian McKnight said during a press conference.

"In coordination with the Mexican government we will continue to investigate members of cartel’s who manufacture and transport drugs into Chicago and elsewhere within our nation… working together on high value targets, [and] cartel members who oversee these organizations," McKnight said alongside Mexican federal officials at the press briefing in Chicago on Wednesday.

Mexico Posts $1.5 Million Bounty for Capturing Drug Lord 'El Mencho'
McKnight added that the bi-national effort will include an enforcement group based in Chicago that will also be aggressively attacking the cartel’s financial infrastructure by denying revenue going back down across the border that elevates the cartel’s power in Mexico.

The joint effort will also help break up the street gangs in the United States. These Mexican drug cartel organizations have stretched their influence around the world and have caused unseen levels of violence throughout Mexico, the official said.

The announcement came at the DEA’s headquarters in Chicago following strategy meetings with leaders from the Mexican Attorney General’s Office and Mexican federal police, the Chicago Tribune reported.

Drug Cartels Use Undocumented Migrants to Distract Patrols at US-Mexico Border
Meanwhile, Mexican authorities have detained Julio Cesar Torres, who has led the armed wing of a powerful Juarez drug cartel in the northern state of Chihuahua, the nation’s interior minister said Wednesday.

Alfonso Navarrete described the captured leader of La Linea group as one of those behind a recent upsurge of violence in the state. The minister said he was on the list of 122 most wanted people.

Torres was arrested during a federal police raid in the state’s most populous city of Ciudad Juarez bordering El Paso in Texas. He took over drug trafficking operations to the United States after his predecessor was captured in May.