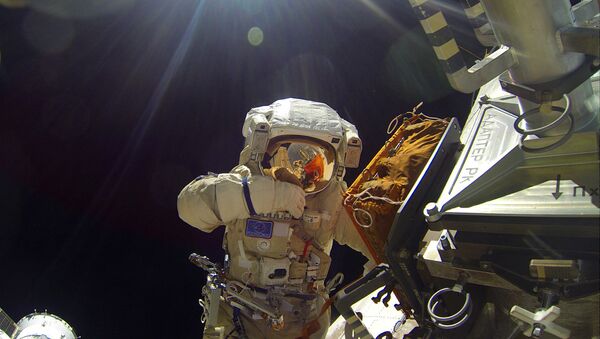 KOROLYOV (Sputnik) - The Icarus antenna will capture signals from GPS tags on animals and pass them on to a central computer inside the Russian module’s pressurized cabin, according to Max Planck Institute for Ornithology.

Sergey Prokopyev and Oleg Artemyev successfully ventured outside of the station's Zvezda module to perch the Icarus antenna on the International Space Station as part of a joint experiment with German scientists to track wild animals.

The project aims to study animal behavior by observing migration of small animals around the globe, investigate the spread of diseases and possibly forecast natural disasters.

NASA Under Fire After Cutting ISS Stream Video Allegedly Showing UFO
Russian cosmonauts have returned from a spacewalk after spending 7 hours 46 minutes outside the International Space Station. Sergey Prokopyev and Oleg Artemyev were outside an hour and a half longer than planned after struggling with cables for a bird-tracking antenna, an executive at Russia's Energia rocket-making firm said.

"The delay was primarily due to the cable-laying," Alexander Kaleri told reporters. "There’re already plenty of cables outside."

The spacewalkers also launched four tiny research satellites. The delay did not allow them to fetch two of the four boxes with microbe samples from the ISS hull. Earlier tests showed exposure made some of them more viral and resilient.

Spacewalkers Sergey Prokopyev and Oleg Artemyev are seen outside of a window on the space station laying cable for the Icarus animal-tracking experiment. #AskNASA https://t.co/yuOTrZ4Jut pic.twitter.com/i5NKQNenQV