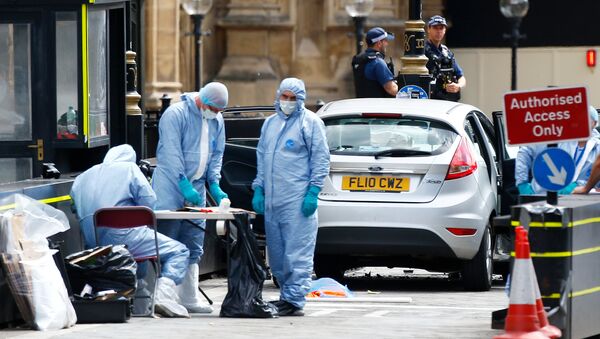 © REUTERS / Henry Nicholls
Subscribe
International
India
Africa
UK police have launched a terror probe into the collision of a car with security barriers outside the Houses of Parliament in Westminster. According to the Metropolitan Police several pedestrians were injured, however, none sustained life-threatening trauma.

Radio Sputnik has discussed the issue with David Otto, a counterterrorism and Organized Crime Expert, Director of TGS Intelligence Consultants Ltd., a company, providing consultancy on security and intelligence.

Sputnik: What can you tell us about this terror attack? What is the latest news coming out regarding what the circumstances were surrounding this?

David Otto: The Metropolitan Police has just released their findings and they have said that the suspect is not cooperating. That tells us that perhaps this could leave us to believe that this could be a DAESH*-inspired homegrown terrorist attack, but it’s too early for one to make that conclusion. As long as the individual is not cooperating, it leaves one with no other option but to conclude that this was definitely a terrorist attack. A video has just been released on one of the Sky News channels and the video shows the manner in which the suspect was actually running into people with this Ford Fiesta and running into some of the barriers which have been put in place.

It tells us that there is some kind of a copycat here because, if we remember, last year, in March 2017, we had a similar kind of attack which was carried out by Khalid Masood in the Houses of Parliament. The conclusion is that terrorism is becoming extremely disorganized and terrorists are actually looking for very high targets, places like the Houses of Parliament, even though the impact would be low. This is a very huge concern. And we think from what we’ve seen is that either way this looks like a successful attack irrespective of the low level of casualties.

Sputnik: When you see these kinds of attacks, what does this really mean? Does this mean that this is a kind of copycat; this is not perhaps even a person who is affiliated but rather a copycat? Is there a difference between these kinds of crime and is it more or less dangerous kind of trend?

UK PM Calls Second Terror Attack on Westminster 'Shocking'
David Otto: Of course. What you see here, if you look at the circumstances of that, it actually tells us that the attack in itself had a very low level of preparation and planning because the Ford appears to be a smaller vehicle as compared to vans that someone would rent to inflict many casualties. It tells you that these individuals are changing tactics and always keep the security forces steps behind. It is a huge concern. Of course, he wasn’t known by the security services as far as we know, but again it tells you that maybe there are a lot of sleeper cells actually residing in the UK. The simple conclusion from that is that we have to be lucky all the time and these terrorists just need to be lucky once. Despite the previous attacks and all the measures which the UK government has put in place, in terms of barriers and vigilance, individuals are still bent on carrying out attacks against the UK. This is a huge problem that needs to be sorted.

Sputnik: Is it possible that this person was not even affiliated and he just wanted to be affiliated?

David Otto: We see that a lot. Of course, the destabilization of Al-Qaeda and that of DAESH in Mosul and Raqqa has led to people not being directed anymore. They aren’t being enabled by these groups that carried out attacks. They are just inspired. Somebody would sit in their home and they would just feel the edge and the inspiration to carry out an attack. What’s important for us to note is that they don’t just do it. They look at other attacks that have been carried out.

That is why this particular attack is very concerning because we had a similar attack last year; and it shows you that there is some kind of a pattern although the tactics and the weapons which have been used in this case turned out to be much smaller ones and differ from the previous attackers who used much bigger ones. A lot of people are getting inspired to carry out attacks and it becomes very difficult even for a country that has about 200,000 suspects on their watch list. The UK has to do more in terms of committer engagement because again the suspect seems to be from an African background and that means the focus of the government has to spread beyond certain communities in the UK and cover much more depth.

Sputnik: When you have a situation where people are just copying things and don’t have an affiliation, how do you guard yourself from that?

David Otto: That is the danger. Terrorists are like fish and people are like water; they live within the people. And the difficulty is that the security services are finding it very difficult to win the hearts and minds of the local population. And that is where the crux of the matter is. The more community cohesion that the security services have and the government has with local communities, the more people will be able to spot those signs and be the real changes within individuals. That is the only way you can fight it. You have to do it from a bottom-top approach. Recently in the UK there has been a huge climate of fear of anti-Semitism. The former Foreign Secretary Boris Johnson had the burqa incident when he said that women in burqas looked like letterboxes. We also have the ISIS Beatles terrorists who are protesting that they shouldn’t be sent to the United States because they might be killed. They want to come back and have justice in the UK. So, there is a huge climate of fear at the moment and we’re not surprised that this attack is happening at this particular time.