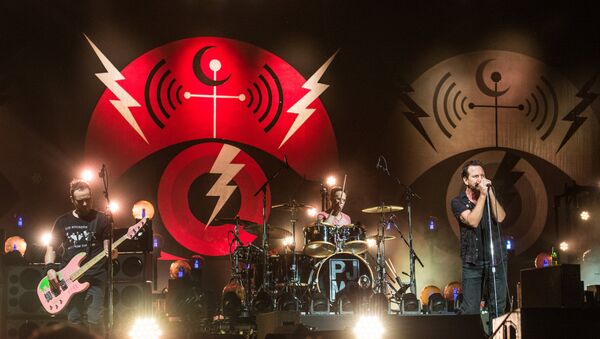 American rock band Pearl Jam landed in hot water this week over an official poster promoting a show in Missoula, Montana ‒ one that featured US President Donald Trump lying dead near a burning White House.

The work, which was a collaborative effort by the band's Jeff Ament and artist Bobby Draws Skulls, also shows the White House on fire and Trump being picked at by a bald eagle as US Senator Jon Tester flies over the flaming residence on a tractor.

The poster was released ahead of the band's Monday show and done in support of Tester, a Democrat serving the Treasure State who is seeking his third term in the US Senate, Pitchfork reported.

​In addition to the poster, the band also shared an image of an early sketch for it. "Y'all know the deal. We're at a tipping point and it's time for action. Jon Tester is the real deal and nobody cares more about our country and especially Montana," a message from Ament on the drawing reads.

According to the Missoulian, both Ament and Tester are from Montana's Big Sandy area, and Pearl Jam has previously put on shows in support of the 61-year-old politician's campaigns in 2005 and in 2012.

"This poster from Pearl Jam is disgusting and reprehensible," Rosendale said. "It depicts a dead President Trump and a burning White House. It's time for Jon Tester to denounce this act of violence and blatant display of extremism!

Netizens, on the other hand, are split on the matter, with many in support and others, not so much.

​The poster flap comes after the band, known for hits such as "Jeremy" and "Black," allowed the Trump baby inflatable to be stationed outside at their London show at the O2 arena in July. During the concert, singer Eddie Vedder addressed the Trump administration, saying that 45 was "bringing people together in a great way."

"When you get 250,000 protestors of all ages, cultures, different sexual orientations… you know, maybe he's uniting people in a way that could be needed in the near future," entertainment website NME quoted Vedder saying.

In response to the backlash, Tester's campaign told the Missoulian Wednesday that it was not involved in the making of the poster and that the show was not a part of a fundraising event, even though the campaign had purchased several tickets and created ticket packages that served as a fundraiser.