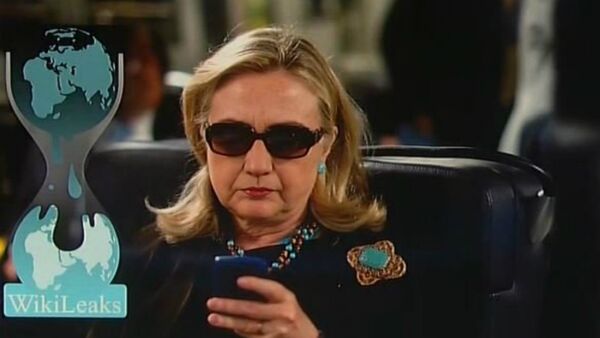 The Democratic National Committee’s vendetta against WikiLeaks, Russia and pro-Trump political operatives took an unconventional turn recently when the political party served WikiLeaks with a subpoena over Twitter.

A law firm representing the DNC notified WikiLeaks it had been sued simply by mentioning the document publisher in a tweet and dumping the associated legal URLs to fill out the rest of the tweet. "By Court order, you are being served with the following legal documents," the law firm said August 10.

Of all the defendants the DNC is hunting with its lawsuit alleging a broad conspiracy to make the Democrats look unelectable in 2016, WikiLeaks was the only entity which was served the subpoena over Twitter.

​This was unprecedented for the law firm representing the DNC, Cohen Milstein Sellers & Toll, PLLC, which created the account for serving subpoenas over Twitter in August 2018 and has only tweeted once.

"After getting no response through traditional methods, Cohen Milstein Sellers & Toll served WikiLeaks via Tweet Friday," the law firm said August 10, "posting a complaint by its client, the Democratic National Committee, that alleges a conspiracy by Russians, the Trump campaign and WikiLeaks to hack and sabotage the party during the 2016 elections."

Twitter is also the same platform where WikiLeaks is disbursed "hacked emails" from DNC servers during the 2016 election campaign. (Bill Binney, a 30-year veteran of the NSA, previously told Sputnik that the emails shared with the public were the result of internal theft at the DNC, not from an external hacker.)

Twitter never banned WikiLeaks for publishing emails from party brass and Clinton campaign manager John Podesta, but it also didn't prevent the DNC's lawyers from giving one of its users a subpoena through its platform.

While Twitter is an extremely unconventional way to serve a person or organization a subpoena, this is not the first time this has happened. A judge in San Francisco authorized nonprofit St. Francis of Assisi to sue a Kuwaiti national accused of providing Daesh with financial support via Twitter in 2016, ABA Journal reported.

Julian Assange, the face of WikiLeaks, has been holed up at Ecuador's embassy in London since 2012. If the proper authorities had attempted to give WikiLeaks the subpoena by serving it in person, and embassy officials denied those attempts on three occasions, then the court could basically say that it had still been served. This, however, would have avoided furthering the use of Twitter as a conduit through which political parties can sue publishers they don't like under the auspices of conspiracy.

US President Donald Trump, Roger Stone and WikiLeaks - who are all listed as defendants in the DNC's lawsuit alleging they all colluded with the Russian government to subvert America's democratic processes - say the lawsuit is more of an opportunity that a threat, CNBC reported April 23.

"We've never lost a publishing case," WikiLeaks said at the time. "Discovery is going to be amazing fun," the publisher said, referring to the process through which plaintiffs and the defendants have to show one another their evidence. They also exploited the news as an opportunity to garner support from their followers to launch a counter-lawsuit.

"We intend to test the basic underlying claims that 'Russians' hacked, stole and disseminated DNC data," one of Stone's lawyers said, "rather than the various other plausible scenarios, including internal theft."

Stone told CNBC via email in April that the lawsuit is a "left-wing conspiracy" with "NO proof of hacking never mind anything else." "My lawyers and I want to examine the DNC servers to settle this bogus claim of Russian hacking once and for all," he noted.

When the DNC sounded the alarm that it had been "hacked," which 2016 Democratic candidate Hillary Clinton later compared to a "cyber 9/11" while speaking in London in October 2017, it mysteriously told FBI and Department of Homeland Security officials they were not authorized to conduct a forensic investigation on the compromised equipment. Before his dismissal, FBI Director James Comey told members of Congress "we were not" granted access to the compromised equipment, even though Clinton viewed the intrusion as being so significant as to compare it to a day when 19 assailants killed 2,977 victims after hijacking passenger jet aircraft and flying them into buildings.

US President Donald Trump also went on the attack.