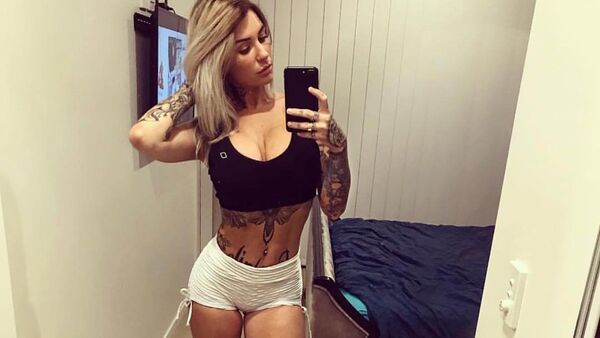 © Photo : @allainavaderfan/instagram
Subscribe
Allaina Vader faces eight total charges, and appears to have followed right in the footsteps of her sporty macho boyfriend.

The partner of former Hells Angels biker Ben Geppert is due to appear before a court on October 23 over allegations of biting a woman in her face, gouging her eyes and stomping on her head in a hair-raising road rage incident on the Gold Coast, in the Australian state of Queensland, in May, according to Gold Coast Bulletin. On Wednesday, she was represented at the Southport Magistrates Court by her lawyer.

Insta-famous Allaina Jones, who is commonly known by the name Allaina Vader, has been hit with eight charges over the violence, namely inflicting bodily harm, possessing drugs and drug utensils, obstructing police and non-abidance of a number of traffic rules.

Heavily-tattooed Vader has earned a big crowd of followers on Instagram along with her brutal boyfriend, macho ex-biker Ben Geppert, who deleted his Insta-page last month. By some quirk of fate, he appeared in the same courtroom on Monday, after a bike incident at a local shopping mall. He was charged with trespassing, willful damage and obstructing a police officer.

Never apologize for not being what they are used too ✌🏼

My other #WCW this week 😍 good lord, she's beautiful. #AllainaVader