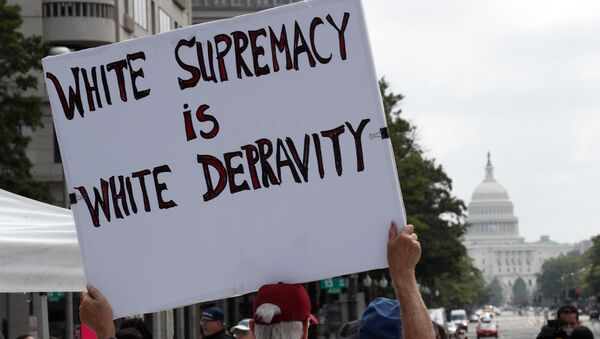 Hundreds of protesters rallied in Charlottesville, Virginia, over the weekend to mark the anniversary of last year’s fatal white supremacist violence, but demonstrators also criticized the huge police presence. Authorities banned most weapons from the protest site, with the exception of guns. While white nationalists rallied in Washington DC.

Sputnik has discussed this with Robert Spitzer, political science researcher at State University of New York College at Cortland.

Sputnik: Ahead of this year’s rallies, Virginia declared a state of emergency and banned a range of items that could be used as weapons, but not guns with respect to the Second Amendment. What is your take on this?

Robert Spitzer: In terms of Virginia, that's under Virginia state law. So there are some limitations in terms of what local police can do to minimize the presence of firearms.

Hundreds Protest in Charlottesville Against 2017 Deadly Rallies - Reports
And I think there are lots of problems with the Virginia state law that would allow people to carry firearms even under some circumstances in a public place, or at a public demonstration, or any public event. And if you go around the 50 states, you’ll find a number of states that have fairly liberal laws that allow people to carry guns in public places and in the modern era I don’t think it’s a very good idea.

But these laws do exist, and probably Virginia is among them, but that’s why, one reason I think, why we saw a very heavy police presence and some of the counter protesters, the people who oppose the white nationalists, were complaining rather bitterly about the heavy police presence, saying they felt threatened by the police and that I thought was a terrible overreaction.

It is certainly understandable that there was a heavy police presence, partly because of the possibility that somebody might be carrying guns, might intentionally or even accidentally discharge a firearm which would be very, very bad.

DHS Chief Suggests ‘Foreign Influence’ Behind Deadly Charlottesville Violence
That didn’t happen, but better to see a heavier police presence than what happened last year. In fact, as a result of the Charlottesville disorders where one person was killed and a number of others were injured, a report said the police produced or attributed to the police “the disastrous results that ensued.” So, not a surprise that there was a big police presence to make sure that there was no disorder including any firearms use.

Sputnik: And actually speaking of firearms, it seems that the NRA was also facing accusations of stoking the white supremacist violence and movement, what are your thoughts on their relationship?

Robert Spitzer: The NRA does have connections with these ultra-right-wing movements.

They don’t like to talk about them and they certainly don’t publicly endorse or support the white nationalist movement, for example, but the problem for the NRA is that they exist on a steady diet of very negative anti-government apocalyptic rhetoric that the government and its agents are coming to knock down your doors some dark and stormy night, and take all your guns, and arrest you, and do all sorts of terrible things, and they talk about fear of crime, fear of super predators.

Neo-Nazi Marine Who Participated in Charlottesville Rally Gets Court Martialed
Their chief message is fear and alienation, and you have to rely on yourself and you have to have your own guns, and that kind of rhetoric takes on a life of its own and it very much feeds, whether intentionally or not, the motivations of these white nationalist, these extremist elements.

Sputnik: It’s been a year since the tragic events in Charlottesville and what has changed regarding the white supremacist movement, or the ultra-right nationalist movement, do you think there’s been any significant change, is their cause winning or losing, or changing in any way?

Robert Spitzer: I don’t think they’re gaining any adherence. They certainly maintain a core of support. Now if you judge by the turnout in Charlottesville and in Washington DC of these white nationalists, the turnout was tiny, even compared to last year, but what has happened in the last couple of years and, frankly, the rhetorical style of President Trump has provided a kind of a safe space for them to come out into the open and that’s what they want to do because they want to try and draw new members.

Last year President Trump's comment after Charlottesville that there were “very fine people on both sides” and my question to President Trump is who are the “fine people” among the neo-Nazis? He should name any, and I don’t know of any, and I don’t think anybody else does either, but the very fact that Trump makes comments like that, that might not seem like they're terribly controversial, is yet another kind of dog whistle indication that it's somehow ok for these groups to occupy public space and seek attention.

Black Man Beaten in Charlottesville Cleared of Assaulting White Supremacist
And that’s what they want to do, there’s nothing new about extremist far-right groups in American politics. They go back many, many decades, and really back further than that even in various forms.

Have they picked up momentum? I don’t really see any evidence that they have, but they certainly are there. They certainly continue to seek and garner attention, and that is a concern.

Views and opinions expressed in this article are those of Robert Spitzer and do not necessarily reflect those of Sputnik.