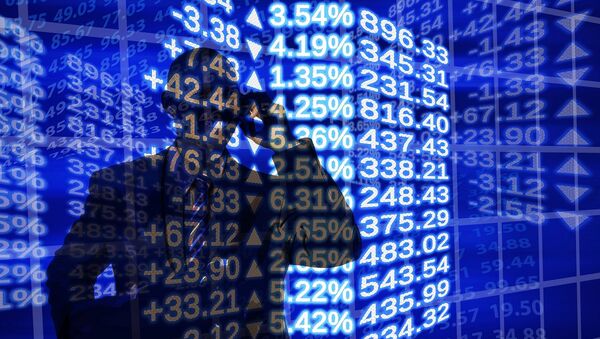 CC0 / Pixabay /
Subscribe
On Monday, Dr. Richard Wolff, economist and professor at the New School University, told Radio Sputnik’s By Any Means Necessary that the stability of the US economy is wavering, and the country could be headed for another economic crash, reminiscent of the 2008 crisis.

"I would certainly be among those who take very seriously worker anxiety. It is, in general, an important aspect of how an economic system works for people," Wolff told hosts Eugene Puryear and Sean Blackmon.

​"Clearly, a system that hypes up your anxiety has to be considered negative. Anxiety can react back on an economy by making people make decisions that they wouldn't make if they weren't anxious [about] the economy. In the aftermath of the crash of 2008, workers in America became extremely anxious about their debts. They had accumulated debts; they couldn't pay those debts; their wages were not sufficient to pay the interest and principal payment."

"As a result, for some years, Americans did not borrow the way they had, because they had gotten burnt. They were deeply anxious about indebtedness because it had hurt them… millions had lost their homes. You could see the effect of anxiety in the very fact that Americans were not buying the way they were before. And that led American companies not to use the profits they earned to expand production and hire workers because Americans were not borrowing to pay for those things. The irony is, the very worsening of the employment situation since 2008 is a direct consequence of the anxiety of the 2008 crash," Wolff continued.

In June, the CNBC All-America Economic Survey revealed that more than half of Americans approved of US President Donald Trump's handling of the economy.

However, in reality, the US economy may find itself in dire straits, unless measures are taken as soon as possible, the US Office of Government Accountability (GAO) warned the US Congress on June 21, 2018, Sputnik reported in June.

"Over the last two or three years, with the endless drumbeat first of Obama and now by Trump that the economy is great, millions of American workers, partly because they hear this every day and partly because the memory of the 2008 crash is now 10 years old, are beginning to borrow again. Now, that is very, very dangerous. For a short time, it may give the economy a boost as people borrow and spend that money. Once the decline begins, as they cannot pay those debts back, and there is every sign they won't be able to, we are facing the risk of another momentous crash," Wolff told Radio Sputnik.

"Those who have debts, I'm particularly thinking of the students in our society, who are coming out of programs with endless amounts of debts… there are studies indicating how this is hyping their anxiety, being anxious about their ability to pay back these huge debts. They are making decisions to take jobs they don't want because they are so worried about being able to pay it [the debt] back. They take jobs that make [them] insecure and depressed. They are postponing marriage and children. That will have ramifications on our society that [are] enormous. Statistics show that the current generation of young people are living with their parents in numbers we haven't seen in decades because they can't afford their own homes," Wolff added.

According to Wolff, capitalism inherently results in economic downturns.

"Capitalism is about two to three centuries old for being the dominant economy. And here's the truth and reality nobody should ever forget. Before capitalism, you had ups and downs in the economy, but they were usually because natural events — floods, droughts, the soil being infertile or warfare," Wolff said.

"Capitalism has had those kinds of troubles too, but capitalism adds something else. In every country where capitalism is the dominant system, they have an economic downturn not related to nature and warfare every four to seven years. And some of them are short and shallow. Others of these downturns are long and deep. Capitalism is an inherently unstable system," Wolff added.

000000
Popular comments
Wolff has read Kondratiev for sure.
alvaro.marfan
14 August 2018, 04:00 GMT1
000000
Capitalism is not only unstable but it is a vicious anti people economic system that concentrates wealth in the hands of a small minority and creates monopolies and cartels through attrition and corporate economic warfare. Capitalism is far more sinister than this article makes it out to be. The author left out the ungodly increase in the Pentagons budget and corporate welfare as contributing factors to the debt, Dr. Wolff mentions only Social Security and Medicare which are mainly paid for by the beneficiaries and Social Security as far as know is an off budget item and running a surplus at this time.
hopscotch64
14 August 2018, 04:45 GMT2
000000
Newsfeed
0
New firstOld first
loader
LIVE
Заголовок открываемого материала
Access to the chat has been blocked for violating the rules . You will be able to participate again through:∞. If you do not agree with the blocking, please use the feedback form
The discussion is closed. You can participate in the discussion within 24 hours after the publication of the article.
To participate in the discussion
log in or register
loader
Chats
Заголовок открываемого материала
Worldwide
InternationalEnglishEnglishMundoEspañolSpanish
Europe
DeutschlandDeutschGermanFranceFrançaisFrenchΕλλάδαΕλληνικάGreekItaliaItalianoItalianČeská republikaČeštinaCzechPolskaPolskiPolishСрбиjаСрпскиSerbianLatvijaLatviešuLatvianLietuvaLietuviųLithuanianMoldovaMoldoveneascăMoldavianБеларусьБеларускiBelarusian
Transcaucasia
ԱրմենիաՀայերենArmenianАҧсныАҧсышәалаAbkhazХуссар ИрыстонИронауОssetianსაქართველოქართულიGeorgianAzərbaycanАzərbaycancaAzerbaijani
Middle East
Sputnik عربيArabicArabicTürkiyeTürkçeTurkishSputnik ایرانPersianPersianSputnik افغانستانDariDari
Central Asia
ҚазақстанҚазақ тіліKazakhКыргызстанКыргызчаKyrgyzOʻzbekistonЎзбекчаUzbekТоҷикистонТоҷикӣTajik
East & Southeast Asia
Việt NamTiếng ViệtVietnamese日本日本語Japanese中国中文Chinese
South America
BrasilPortuguêsPortuguese
NewsfeedBreaking
22:22 GMTPentagon Plans to Boost US Military Bases in Australia, Guam Against China - Reports
22:05 GMTOver 30 Hospitals in New York to Cease Elective Procedures Amid COVID-19 Surge
21:55 GMTFed's Powell Warns Omicron Poses Greater Risks to US Economy, Increases Uncertainty for Inflation
21:48 GMTPentagon Confirms Austin Ordered Inquiry Into 2019 US Airstrike in Syria That Killed Civilians
21:16 GMTGOP Senator Calls Biden ‘Mad Hatter’ For $1.75 Trn Bill, Says Based on ‘Alice in Wonderland’ Logic
20:54 GMTDisgraced Cuomo Continues to Receive State Pension Even Amid Ongoing Criminal Probe - Report
20:34 GMTLionel Messi Wins 7th Ballon d'Or
20:28 GMTNATO Chief Says Bloc Seeing Biggest Expansion of Defense System Since Cold War
20:23 GMTIns and Outs of Labour Leader Starmer's Front Bench Shake-Up
20:21 GMTProcess of Restoring JCPOA Will Not Be Easy, Russian Envoy Says
20:13 GMTSeven UN Staffers in Unexplained Detention as Ethiopia Arrests UNICEF Employee
20:00 GMTAfghan Air Forces Hold First Military Drills Since Taliban Takeover - Reports
19:58 GMTPhotos: Ethiopian Army Recaptures Strategically Important Town of Chifra, on Edge of Tigray State
19:53 GMTIsrael Pleads With Countries to Ignore Iran's 'Nuclear Blackmail', as Tehran Set to Salvage JCPOA
19:25 GMTIsrael Shares Intel With US, Allies on Iran Moving to Enrich Uranium to 90% - Reports
19:00 GMTGerman Court Rules Kohl's Widow Cannot Inherit $1Mln Compensation From Journalist
18:59 GMTShanghai Data Exchange: How China is Set to Outpace US in Data Trade & Technological Competition
18:57 GMTEx-US Capitol Police Officer Appears in Court for January 6 Related Charges - Reports
18:54 GMTFrance to Propose EU-UK Pact on Illegal Migration
18:50 GMTBeijing Has No Plans to Invite to Olympics US Politicians Calling for Boycott, Report Says