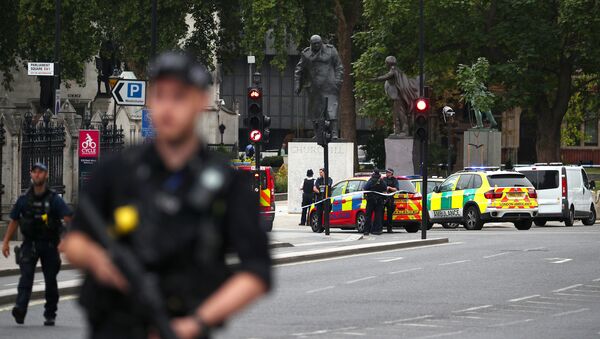 Following the meeting, the Prime Minister's official spokesman revealed there were 676 live investigations by MI5 and counter terrorism police recorded at the end of June 2018. That's up from 500 in March.

.@Theresa_May's spokesman says attack in #Westminster is shocking, threat to #UK from #terrorism remains severe, since March 2017 17 plots have been successfully foiled, at the end of June there were 676 live investigations ongoing by security services. —@Reuters

"Today's suspected attack outside the Houses of Parliament is shocking", Theresa May said in a statement.

"For the second time in as many years the home of our democracy, what is a potent symbol of our precious values of tolerance and freedom, has witnessed terrible scenes just yards from its door."

Theresa May also praised the "formidable" emergency services who were on the scene in minutes. The Prime Minister, who is on holiday at the moment said the terror threat to the UK from terrorism remains severe.

READ MORE: Terror Related Incident in Central London — What We Know So Far

"The twisted aim of the extremists is to use violence and terror to divide us. They will never succeed," Theresa May said at the end of her statement.

A man remains in custody held on suspicion of terror offences after a car he was driving crashed through security barriers outside the Houses of Parliament in Westminster. Scotland Yard says the man in his late 20's was not known to police or MI5; it's understood he's from the Birmingham area of Britain and was acting alone.