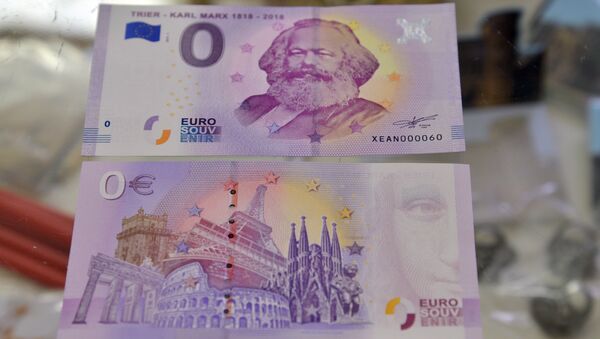 Collectors and tourists alike have already bought over 100,000 of the souvenir banknotes with Karl Marx's face on them, which go for 3 euros each. Sputnik got in touch with the bills' creator to find out what motivated him to get in on the souvenir currency craze.

The local tourism board in Marx's hometown of Trier, Germany, has confirmed that a 0 euro note bearing an image of the philosopher has become a best seller. The bills, issued in honor of the 200th anniversary of Marx's birth, marked on May 5, sold out their original 5,000 notes in less than a month, according to Sudwestrundfunk Radio.

"Nobody expected that the bills would become so popular," Trier's tourism and marketing representative, Hans-Albert Becker, said, noting that the Marx bill was by far the best seller among the latest run of souvenir bills. The 0 euro bills, which include a real serial number and feature a purple hue, have proven particularly popular in China, where Marx remains one of the philosophers guiding the ideology of the country's ruling Communist Party.

Not Exactly a Five-Finger Discount: WATCH Ant Casually Stealing Diamond
The 0 euro bills were thought up by French entrepreneur Richard Faille. Inspired by the success of his project to produce souvenir medals (which sold over 60 million pieces and were designed in collaboration with the Paris Mint), Faille decided to create these unusual, high-quality "souvenir banknote" designs in 2015.

"Each year, we try to create a collection which reflects the cultural and tourist landscape in all its diversity, both geographically and sectorally," Faille told Sputnik France.

According to the entrepreneur, his premium quality souvenir banknotes were developed in collaboration with world mints. "They have all the characteristics of a traditional banknote, including a watermark, holographic protection, tactile marks, effect visible under UV-light, etc." he explained.

The painstaking attention to detail that goes into the bills increases the notes' value among collectors. For example, a bill of a Stadium in Duisburg, Germany, can go for up to 1,000 euros on eBay. Others have been spotted being sold for as much as 3,000 euros.

Russian 'Weld Queen' Reveals How She Got Her 'Magnetic' Attraction to Welding
"Each banknote is unique, because it has its own serial number. Collectors hunt for notes with the number one or six zeros," (i.e., test banknotes printed before the launch of the rest of the lot), Faille explained. "There are people who buy banknotes whose number coincides with the year they were born."

Collectors, the businessman noted, have their own peculiar habits. "Collecting is a passion, and everything having to do with passion is irrational," he admitted.

Along with Marx, two other bills – one dedicated to Martin Luther and the 500th anniversary of the Protestant Reformation, and the other featuring a three-masted ship from the German Marine School at Kiel, have become best sellers. The Martin Luther bill alone has sold several hundred thousand copies. Altogether, Faille's company, Euro Banknote Memory, has sold over 5 million souvenir banknotes, and he has no plans of slowing down. The entrepreneur is looking to expand the business, with bills expected to reach 20 countries by 2019, up from 11 today.