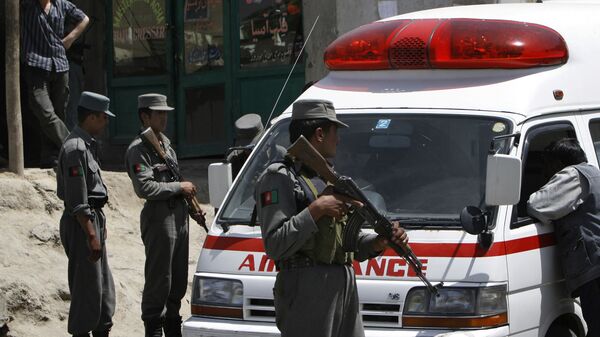 Afghanistan has long been in a state of political turmoil due to the conflict between the Taliban* and the Afghan government, which has been exacerbated by other anti-government terrorist groups active in the country.

At least one police officer was killed and another was injured after a suicide bomber set off an explosive near the election office of Afghanistan's capital, Kabul, on Monday, Reuters reported, citing the election commission's official.

READ MORE: Over 100 Dead, 133 Injured During Attack on Afghan City of Ghazni — Reports

US Denies Claims of Civilian Casualties Near Afghan City of Kunduz - Pentagon
At that time, dozens of people gathered around the election office to protest against the disqualification of one of the candidates over alleged ties to "illegal armed groups."

The parliamentary election in Afghanistan is slated for October. Afghan President Ashraf Ghani offered the Taliban* movement the opportunity to participate in the parliamentary and local elections in order to resolve the years-long conflict. The Taliban, however, rejected the offer, stating that his people have been "cheated" at the previous vote. The movement also urged a boycott of the elections, as the country is "occupied."

*The Taliban is a terrorist group, banned in Russia