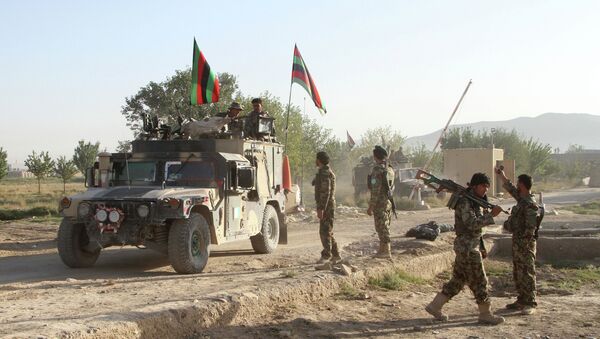 © AP Photo / Rahmatullah Nikzad
Subscribe
Taliban militants and security forces have been locked in a deadly battle in Afghanistan’s strategically important Ghazni province since early Friday. Afganistan's defense minister stated on Monday that at least 90 soldiers and almost 200 militants have so far been killed in the clashes.

Afghanistan's defense minister has confirmed that Pakistani, Chechen and Arab fighters were fighting alongside the Taliban, which launched an attack on the city of Ghazni in the early hours of Friday and that at least 194 militants have so far been eliminated by security forces.

The minister of defense, Tariq Shah Bahrami, and Interior Minister Wais Ahmad Barmak, in a press conference, stated that the government had dispatched an additional 1,000 troops to Ghazni to bring the situation under full control.

Over 100 Dead, 133 Injured During Attack on Afghan City of Ghazni - Reports
The defense minister admitted that there had been some shortcomings from the security point of view, but troops were soon mobilized from neighboring provinces to repel the insurgents.

Earlier, President Ashraf Ghani held an emergency meeting of the armed forces to take stock of the situation in Ghazni.

Tonight I chaired the Commander in Chief’s emergency meeting to take stock of the situation in Ghazni Province. In the meeting I spoke with the Provincial Governor, Commander of 203rd Thunder Corps, and Provincial Police and NDS Chiefs.

Some reports claimed that the Taliban had taken control of Ghazni and that only the governor's compound and NDS building remained within the government's control.

Seems the city fully controlled by Taliban, because here in the heart of the city no clashes ongoing.

Another report says Taliban wanted troops and officials inside governors compound to surrender, but still they didn't reach to an agreement. #Ghazni pic.twitter.com/aGg3NryyfH

The Taliban has also blocked the Kandahar-Kabul highway in the Shajoy district of Zabul province.

"Residents of Ghazni city have seen their city turn into a battlefield since Friday morning, with fighting and clashes reportedly still ongoing. We have received initial reports of a number of civilian casualties and of people trying to reach safe areas outside of the city," Dr. Rik Peeperkorn, acting UN Humanitarian Coordinator for Afghanistan, said in a statement.

"According to sporadic reports from within the city, many families have reportedly taken shelter in their houses and are unable to leave their homes. Vital communications networks and the electricity supply are down in the city of 270,000 people, which has impacted the water supply and food is also reportedly running low," the statement added.

JUST OUT: Statement of the acting #Humanitarian Coordinator for #Afghanistan on the fighting in #Ghzani. Get it is here: https://t.co/56ZtSoCtBH pic.twitter.com/ew7YtgOhGP

Ghazni, 150 km east of Kabul, holds immense strategic importance, as it is situated on a highway connecting the capital to Kandahar.