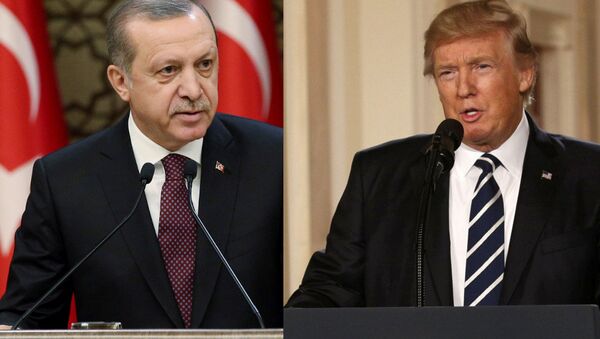 Ibrahim Kalin, the official representative of the Turkish president, believes that the US may lose Turkey as its ally, according to his article in the Daily Sabah newspaper.

"The US runs the risk of losing Turkey as a whole. The entire Turkish public is against US policies that disregard Turkey's legitimate security demands. Threats, sanctions and bullying against Turkey will not work. It will only increase Turkey's resolve. But it will also further isolate the US in both Turkey and on the international scene," Kalin wrote.

He pointed out that Washington "has undermined confidence to itself as a reliable partner and ally."

US, Turkish Diplomats Meet to Discuss Detained Pastor Brunson
"As a NATO ally, it has done more than its share to provide security for all. It has stood by its allies against all forms of terrorism. It has cooperated with them to eliminate terrorist threats against their countries. It is only natural that it demands its allies to reciprocate. Yet its allies have done little or nothing to help Turkey in its fight against the PKK and FETÖ terrorist groups," Kalyn wrote.

Earlier on Friday, The New York Times published an article by Erdogan himself. Turkish President Recep Tayyip Erdogan wrote that Ankara may seek new friends and allies if it does not see more respect and reciprocity in bilateral ties with Washington.

The Turkish president stressed that unilateral US actions against Turkey would "only serve to undermine American interests and security."

The US government recently imposed sanctions on Turkish ministers for not releasing a pastor who was jailed by Ankara for allegedly playing a role in the 2016 military coup. The previous month, pastor Andrew Brunson was released from a Turkish prison and placed under house arrest.

Turkish President Recep Tayyip Erdogan said on July 4 that Ankara might freeze the assets of top US justice and security officials in response to US sanctions against Turkish ministers.