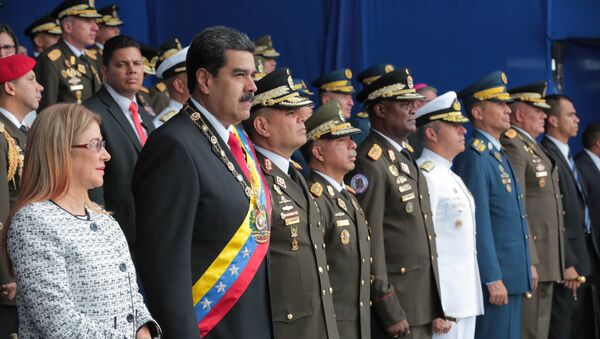 © REUTERS
Subscribe
MEXICO CITY (Sputnik) - Venezuelan President Nicolas Maduro asserted on Saturday that some of those responsible for the failed attack on his life have taken shelter in Peru.

"Some of the criminals, the terrorists have gone to Peru to hide and find protection there. I am calling on the Peruvian authorities to capture and extradite them," Maduro told a national state-run TV broadcaster.

The Venezuelan Foreign Ministry had already contacted the Peruvian authorities on this issue, Maduro noted.

Venezuela Authorizes Arrest of Opposition Leader Accused of Attack on Maduro
Earlier, Venezuelan Interior Minister Nestor Reverol said that authorities had identified 23 people suspected of having a role in the failed assassination attempt on President Nicolas Maduro a week after the attack.

On Thursday, the minister said 25 people were under investigation on suspicion of involvement in the apparent assassination attempt.

Ten out of these 23 people had been detained while arrest warrants had been issued for 13 others, Reverol said on Saturday.

Those detained included the opposition lawmaker Juan Requesens, the interior minister continued. Though Reverol called Requesens the ex-member of the Venezuelan National Assembly, the legislature had not dismissed him, while the National Constituent Assembly, mandated with working on the country’s new constitution, had lifted his immunity after his detention on Tuesday.

On Thursday, Requesens admitted that he had helped another assassination suspect to cross the Venezuelan border and leave the country.

Those who authorities are seeking to apprehend under the arrest warrants include opposition figure Julio Borges, who is currently residing in Colombia, according to Reverol. Borges, who is a lawmaker, too, was also stripped of his parliamentary immunity earlier this week.

Venezuela has asked the Colombian authorities to extradite him, however, Bogota replied that it had not received such a request. Moreover, media reported that Caracas had asked Interpol to assist Venezuela in Borges’ arrest.

Maduro Accuses Opposition Leader Borges of Involvement in Recent Drone Attack
According to the Venezuelan authorities, Maduro faced a failed assassination attempt with use of explosive-carrying drones during his address at a military parade in Caracas on August 4. Maduro was unharmed, but seven soldiers were injured in the incident.

The president accused opposition forces and Colombia of having organized the attack on him, adding that some of the assassination perpetrators resided in the United States. Both Bogota and Washington denied any involvement in the incident. The authorities are currently engaged in various activities aimed at finding the perpetrators of the attack.