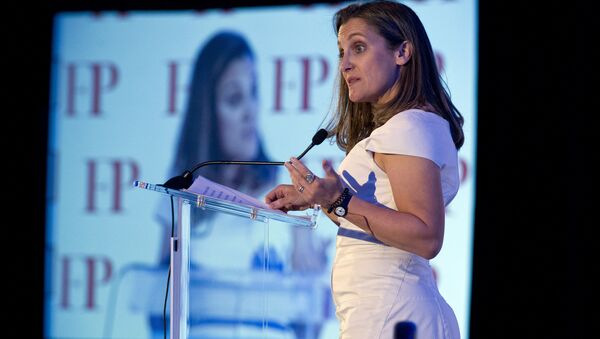 MOSCOW (Sputnik) - US State Secretary Mike Pompeo spoke on a phone with his Canadian counterpart Chrystia Freeland and discussed the diplomatic row between Riyadh and Ottawa as well as the US sanctions on Iran, State Department spokeswoman Heather Nauert said.

The relations between Saudi Arabia and Canada have been tense since last week, when the Canadian Foreign Ministry called on Saudi Arabia to immediately release the human rights activists detained in the country, which Riyadh considered as meddling in its affairs.

Hajj Disrupted for Canadian Muslims as Saudi Airlines Cancel Flights Amid Spat
On Monday, Saudi Arabia recalled its ambassador to Canada for consultations, gave the Canadian ambassador to Riyadh only 24 hours to leave the country, froze trade transactions with Canada and announced the relocation of Saudi citizens studying in Canadian universities to other countries.

On Wednesday, Canadian Prime Minister Justin Trudeau said that Freeland remains engaged in talks with the government of Saudi Arabia despite the row. However, Trudeau stressed that Ottawa will continue to “speak strongly” on human rights’ violations.