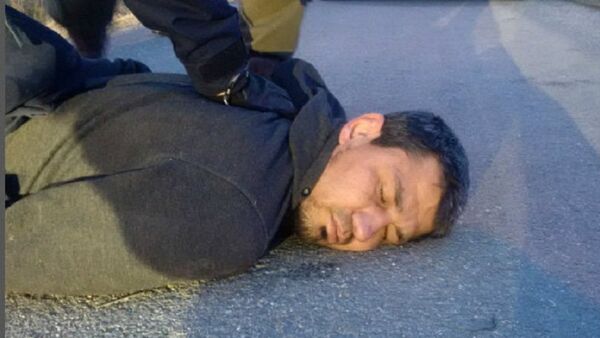 A 33-year-old gang member reportedly handed "several blows" to the terrorist who in 2017 mowed down dozens of people on a pedestrian street in central Stockholm, killing five and maiming 14.

Uzbek terrorist Rakhmat Akilov has been manhandled by another inmate at maximum-security Kumla prison, where he is serving a life sentence, national broadcaster SVT reported.

A former gang member reportedly managed to enter 39-year-old Akilov's cell and closed the door. Subsequently, "screaming and banging" was heard, during which the 33-year-old dealt "several blows" to Akilov, who was lying on the floor.

Whether either of the two was hurt was not reported. Police investigator Karin Eldbom only confirmed that a report on a threat of violence against an inmate had been compiled. However, SVT reported that the attack is seen as an act of revenge for the Stockholm truck attack, which Akilov masterminded and carried out.

Akilov's attacker, who is serving a four-year sentence for an aggravated gunfight, will be placed in an isolation cell.
This June, Rakhmat Akilov was sentenced to life in prison and expulsion from Sweden for the deadly truck attack on Drottninggatan in Stockholm in 2017.

During the trial, he Akilov, a rejected asylum seeker who had dodged expulsion, stated that his plot was to "kill as many Swedes as possible." During a forensic investigation, Akilov was found to have "contradictory morals" and a "simplified worldview" influenced by a strictly sectarian interpretation of Islam. Nevertheless, he was found sane, as his deviations didn't constitute psychosis.

The maximum security Fenix department inside the Kumla facility has been described as a "prison within a prison" and is reserved for the most dangerous and hardened criminals. The Fenix department consists of four wings with six cells each and a common space. In the center, there is a guardroom, from which prison staff monitor the proceedings. To get inside the Fenix department, one has to pass about 10 locked doors and two security checks, SVT reported.