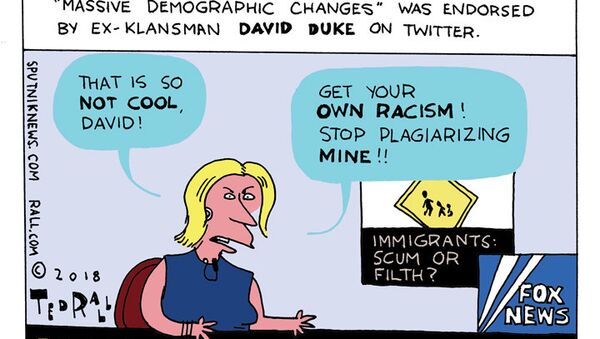 Those attending the second annual Unite the Right rally in Washington, DC, this weekend definitely got some pregame fire in their belly after hearing Fox News "Ingraham Angle" host Laura Ingraham slam New York Congressional candidate Alexandria Ocasio-Cortez and both legal and illegal immigration within the US.

"Massive demographic changes have been foisted upon the American people. And they're changes that none of us ever voted for and most of us don't like," said Ingraham, providing no evidence to back up her "us vs. them" fear mongering.

She went on to say that most of this change is due to "both illegal and, in some cases, legal immigration," while footage of individuals scaling the border wall was shown in the background.

While Duke seems ready to burn a cross in his support of the poor man's Ann Coulter, someone at Fox News may have kindly asked the former KKK leader to rescind his support in order to distance themselves from, you know, the Klan and other white supremacists.