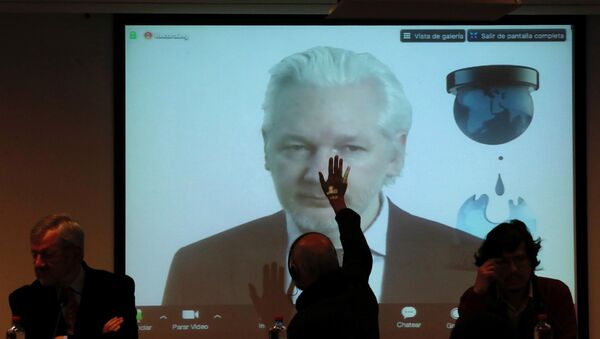 © REUTERS / Rodrigo Garrido
Subscribe
Julian Assange's lawyer has said that the US government must guarantee her client's security if he agrees to testify in a Senate inquiry into alleged Russian meddling in the 2016 US election. Speaking to Sputnik, renowned journalist John Pilger, a personal friend of Assange, said it isn't clear exactly what US lawmakers are hoping to find out.

Sputnik: What is the ultimate motive behind the request by the US Senate Intelligence Committee for Julian Assange to testify in its probe into Russia's alleged meddling in the 2016 election?

John Pilger: It's not known whether Julian is going to appear before the committee; they have certainly been in touch. But Julian and WikiLeaks have made it very clear that Russia has had absolutely nothing to do with the Podesta-Hillary Clinton email release of [2016]. Julian Assange has said that the source was not a state player in Russia [and that] it didn't come from Russia at all. That's what he would say before the Committee.

Pompeo Salutes Ecuador on National Day, Lauds "Bond" Between Countries
I don't know whether he is likely to appear. He's of course severely restricted, because he's in effect imprisoned inside the Ecuadorian Embassy in London.

Sputnik: One interesting thing for most watching the Assange situation is the position of the Australian government, and whether or not Canberra will act now, and why they haven't for so many years. Can you shed any light on this?

John Pilger: It's scandalous. Julian is a citizen of Australia, and recently the foreign minister of Australia, Julie Bishop and her chief of staff visited the Foreign Office in London, and the State Department in Washington. I understand that they raised the matter of Julian Assange, and were received with either silence or an evasive answer. But the point about this is that they didn't push it; they didn't challenge it.

Australian Prime Minister Malcolm Turnbull could resolve this by simply saying that Australia would provide the diplomatic facility for its citizen, Julian Assange, to leave the Embassy and come back to Australia. It would be well within Australia's diplomatic and legal rights to do that. The United Nations has said that Julian has the legal right under international law of free passage out of the Embassy. That has been denied to him by the British government.

Is BBC Spying on WikiLeaks Founder Assange in Ecuadorian Embassy?
The Australian government could offer that; it would get certain kudos for doing it. But the Australian government is effectively an arm of the United States in terms of foreign policy or any kind of contentious issues. So that hasn't happened, but what has happened is that Australians appear to have put forward some kind of deal, as I understand it, that if Julian was prepared to give up WikiLeaks, then there might be some hope of him coming back to Australia.

It's a disgraceful arrangement; no deal has been offered him and nor would he accept it. But the fact that they're even discussing that — it's like saying to the editor of a newspaper, let's say the New York Times, that 'we won't prosecute you for printing the truth about certain government secrets if you give up your role as editor and renounce it,' in effect.

The machinations around Julian go on, but they are a disgrace, and I would say especially so when it comes to the government of his own country.

John Pilger is a veteran journalist and documentary filmmaker whose work has won major awards in Britain, Europe and the United States. The views expressed by Mr. Pilger are those of the speaker, and do not necessarily reflect those of Sputnik.