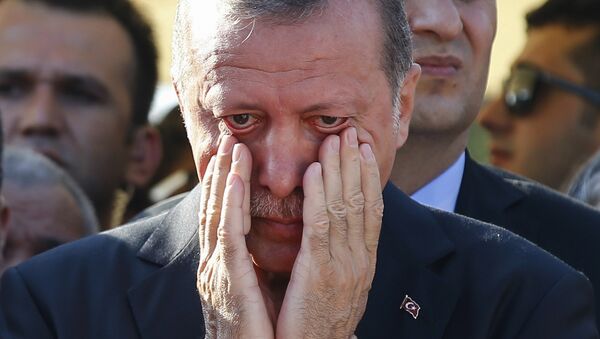 © AP Photo / Emrah Gurel
Subscribe
International
India
Africa
Washington has imposed sanctions against Turkey's Minister of Justice Abdulhamit Gul and Minister of Interior Suleyman Soylu for participating in the detention of US pastor Andrew Brunson who is suspected of being connected to the Gulen movement, deemed a terrorist group by Ankara.

The US is considering the possibility of implementing more "punitive measures," such as stronger sanctions, against Turkey after the recent talks on the release of the US pastor Andrew Brunson allegedly failed, reported the Wall Street Journal, citing an anonymous source.

Separately, Bloomberg reported, citing an anonymous US official that during the talks between the Turkish deputy foreign minister and his American counterpart the sides failed to reach common ground regarding the fate of the US pastor. The US State Department hasn't yet commented on the claims, noting only that the participants to the talks had discussed the issue, along with bilateral relations in general.

The media have also reported that Turkish officials raised the issue of deputy CEO of Halkbank Mehmet Hakan Atilla, who was given a 32-month prison sentence by a New York court for attempting to help Iran bypass US sanctions. According to the source, Washington has refused to discuss the matter until Brunson is released.

The US imposed sanctions against Turkey's Minister of Justice Abdulhamit Gul and Minister of Interior Suleyman Soylu for alleged human rights abuses and the arrest of pastor Andrew Brunson. Washington believes that he was jailed unlawfully. Ankara has scolded the US sanctions and promised to freeze US Justice and Interior Secretaries' assets in Turkey.

The pastor was released from a Turkish prison last week and placed under house arrest.

Turkey jailed Brunson about two years ago for his alleged ties to the movement founded by Islamic cleric Fethullah Gulen, which is considered a terrorist organization by Ankara. Turkey has accused Gulen and his movement of orchestrating the 2016 failed military coup.