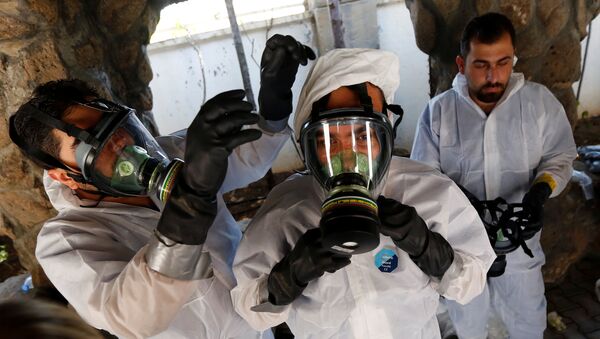 © REUTERS / Murad Sezer
Subscribe
International
India
Africa
WASHINGTON (Sputnik) - The US government unveiled sanctions against Russia related to the Skripal affair, parts of which Moscow can prevent only if they meet demanding conditions including allowing international observers into the country to conduct intrusive chemical weapons inspections.

The new sanctions are tied to a March chemical weapons attack on former GRU officer Sergei Skripal and his daughter Yulia in Salisbury, in the United Kingdom. Russian representatives in the United Nations said Moscow did not produce Novichok, the nerve agent used in the incident, and did not plan or carry out any attacks on foreign soil.

The timing of the sanctions, the second wave of which a State Department official admitted were "draconian," comes just as a delegation led by US Senator Rand Paul is visiting Russia to try and improve relations between the two countries.

The State Department claimed in a press release on Wednesday that the new wave of sanctions come after the United States concluded earlier this week that Russia’s alleged involvement in the Skripal attack represented a breach of international statutes.

"Following the use of a ‘Novichok’ nerve agent in an attempt to assassinate UK citizen Sergei Skripal and his daughter Yulia Skripal, the United States, on August 6, 2018, determined… that the government of the Russian Federation has used chemical or biological weapons in violation of international law or has used lethal chemical or biological weapons against its own nationals," State Department spokesperson Heather Nauert said in the statement.

A senior State Department official said in a conference call with reporters shortly after the statement was released that the first wave of sanctions will take effect on or around August 22.

World
Ex-Spy Skripal's Niece Intends to Accompany Her Grandmother to London
The first wave will ban licenses for exports of sensitive national security material to Russia, the official explained.

The United States will impose a second round of sanctions three months after the initial sanctions on August 22 if Washington cannot verify that Moscow has met the criteria under the Chemical and Biological Weapons Control and Warfare Elimination Act (CBW), the official said, citing provisions in the act.

The official said the second batch includes sanctions that are "in general more draconian than the first round."

These sanctions may include downgrading or suspending diplomatic bilateral relations, suspending Aeroflot flights, prohibiting bank loans, and cutting off exports and imports between both countries, and other restrictions as outlined in the act under Section 307(B).

The US government will waive sanctions related to space flight activities, however, because there are space flight actions in which the United States is engaged with the Russian Federation, the official said.

The United States will also waive US foreign assistance to the Russian people, and items related to safety and commercial passenger aviation.

Russia can take action to avoid the second round of sanctions from coming into force, although the State Department official acknowledged that Moscow would first have to meet "demanding" requirements among which include intrusive inspections.

"They [conditions] include… that Russia has provided reliable assurances that it will not in the future engage in such activities and also that Russia is willing to allow on-site inspections by United Nations observers or other internationally recognized impartial observers or other reliable means that exist to ensure the government is not using chemical or biological weapons in violation of international law," the official said.

Finance Min.: Russia to Rely on Domestic Investors if US Sanctions Russian Debt
If these, among other conditions, are not met the second round of sanctions will go into effect three months after August 22. The State Department representative also claimed that the United States wants to maintain relations with Russia despite the new sanctions.

Washington informed Moscow about the decision shortly before the State Department unveiled the sanctions publicly, the representative added.

UK Prime Minister Theresa May, according to a statement released by her office, welcomed the new batch of US sanctions.

"The UK welcomes this further action by our US allies," the statement said on Wednesday. "The strong international response to the use of a chemical weapon on the streets of Salisbury sends an unequivocal message to Russia that its provocative, reckless behavior will not go unchallenged."

The United Kingdom was backed by its usual friends in both houses of the US Congress, including House Foreign Affairs Committee Chairman Ed Royce.

"The administration is rightly acting to uphold international bans on the use of chemical weapons," Royce said in a press release. "The mandatory sanctions that follow this determination are key to increasing pressure on Russia. [Russian President] Vladimir Putin must know that we will not tolerate his deadly acts or his ongoing attacks on our democratic process."

US Senator Rob Portman, a member of the Senate Foreign Relations Committee, in a statement, said the United States must stand with its British allies and hold Russia accountable by imposing even more sanctions.

The Russian Embassy in Washington was outraged after being told about these so-called "draconian" measures based on wild allegations.

"On August 8, 2018, our Deputy Chief of Mission was informed in the State Department of new ‘draconian’ sanctions against Russia for far-fetched accusations of using the ‘Novichok’ nerve agent against a UK citizen S. Skripal and his daughter," the Russian Embassy in the United States said in a statement on Facebook on Wednesday.

The diplomatic mission accused the United States of an "assembly line" style of imposing unsubstantiated sanctions on Russia and refusing to communicate.

"We grew accustomed to not hearing any facts or evidence. The American side refused to answer our follow-up questions, claiming that the information is classified. However, we were told that the US has enough intel to conclude that ‘Russia is to blame,’" the statement said.

The Embassy reiterated that, in its letters to the State Department, it had confirmed that it continued to strongly stand for an open and transparent investigation into the March events, and had proposed publishing the exchange. "No answer has followed so far," the Embassy concluded.