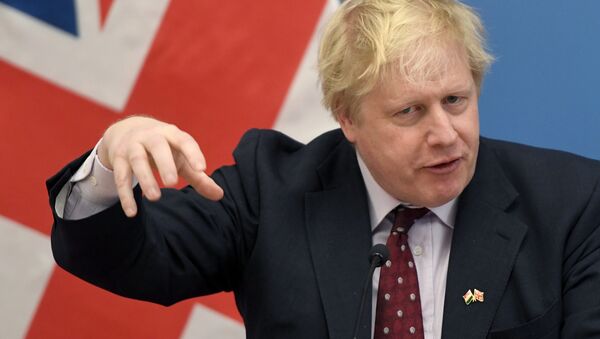 Boris Johnson will be probed for a possible violation of the Conservative Party's code of conduct after his remarks on Muslim women in burqas, the Evening Standard newspaper reported on Thursday.

According to the media outlet, citing unnamed party sources, the formal decision on the investigation is expected to be made later in the day.

“It is not personal and it has nothing to do with Brexit, it is simply the same rules that apply to everyone in the party,” the source told the newspaper.

The newspaper further noted that the party code says that elected Tories must “lead by example to encourage and foster respect and tolerance.”

In a parallel development, Metropolitan Police Commissioner Cressida Dick said on Thursday that Johnson's recent remarks did not "reach the bar" to be considered a criminal offense.

"I know that many people found it offensive… but he did not commit a crime," Dick told the BBC.

Over the weekend, Johnson wrote an article about the total ban of the Muslim veil in Denmark in his Daily Telegraph weekly column. Despite the fact that he didn't endorse the complete prohibition, he penned that the burqa was "oppressive" and "ridiculous":

“If you say that it is weird and bullying to expect women to cover their faces, then I totally agree – and I would add that I can find no scriptural authority for the practice in the Koran. I would go further and say that it is absolutely ridiculous that people should choose to go around looking like letter boxes…,” he wrote.

The ex-foreign secretary, who is known for his eccentric remarks, further alleged that he would "feel fully entitled to ask" a Muslim woman to remove her burqa so that he "could talk to her properly":

"If a female student turned up at school or at a university lecture looking like a bank robber then ditto: those in authority should be allowed to converse openly with those that they are being asked to instruct," Johnson suggested.

The remarks sparked outrage in the UK, with senior Conservatives blasting Johnson's comments as Islamophobic and the Tory chairman, Brandon Lewis, asking Johnson to apologize.

UK Prime Minister Theresa May also intervened, saying it was necessary to be careful about the language used in the burqa debate.

“Some of the terms that Boris used in describing people’s appearance obviously have offended people and so I agree with Brandon Lewis [that Johnson should apologize].”