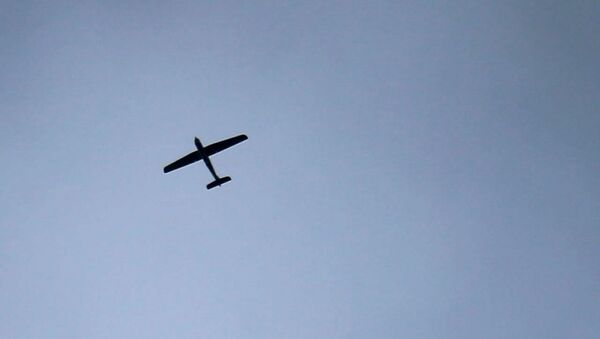 MOSCOW (Sputnik) - Russian air defenses at the Hmeymim airbase shot down on Thursday an aerial drone launched by militants operating in Syria's province of Latakia, the Russian Center for Syrian Reconciliation said.

"On August 9, the air defense systems of the Hmeymim airbase detected an aerial drone launched from the territory controlled by illegal armed groups in the north of Latakia province," the center said in a statement, adding that the drone was intercepted at a safe distance from the base.

Hmeymim Air Defenses Shoot Down Militant UAV in Syria - Russian MoD
According to the center, the incident incurred no casualties or material damage, and the operations at the base were not interrupted.

This is not the first time Russian military downs drones launched at the Hmeymim airbase. Previous month, the Russian Defense Ministry reported that the Russian Air Force destroyed a UAV, launched from the territory under the control of illegal armed formations in the north of the province of Latakia.

Such incidents occurred also in June, as well as in May and April, when drones of unknown origin were detected and destroyed by Russian airspace control units northeast of the air base.

Russian military had been deployed in Syria in the fall of 2015, after Syrian government asked for Moscow's assistance in the fight against terrorism.