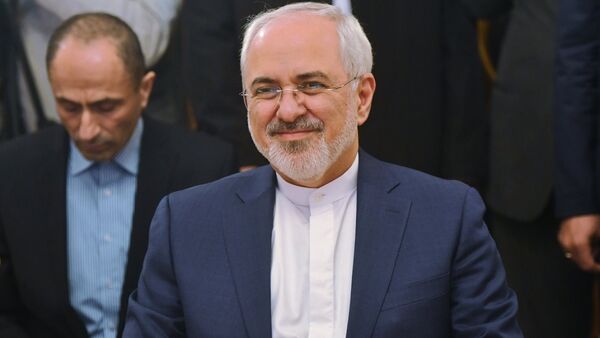 © Sputnik / Mikhail Voskresensky
/
Go to the mediabank
Subscribe
International
India
Africa
As the European Union is trying to salvage the Iran nuclear deal and protect the interests of European companies which could suffer as a result of Washington’s sanctions, Tehran wants to make sure that its business ties with Europe will not be hurt after the second round of US sanctions takes effect in November.

Iran says that chances are high that it will receive the necessary trade and banking guarantees from Europe to keep alive the 2015 nuclear accord which the US has withdrawn from and threatens to break up.

Iran Wants Guarantees From EU That JCPOA Would Be Beneficial for It - Zarif
In an interview with the newspaper Iran Daily on Wednesday, Iran’s Foreign Minister Mohammad Javad Zarif mentioned a list of measures being prepared by Europe to keep the agreement economically meaningful for Tehran and voiced strong optimism that those measures would be effective.

Zarif said that the Europeans “are moving in the right direction,” and that he hoped that most of these measures would be implemented before the arrival of the second round of US sanctions in November.

When asked if Europe would be able to meet that deadline, Zarif said that given the Europeans’ and other countries’ resistance to the re-imposition of US sanctions, Washington’s withdrawal from the 2015 nuclear agreement would fail to bring about a collapse of the landmark accord.

Almost immediately after President Donald Trump announced in May that the United States was walking out of the JCPOA, Germany, France and the UK — all of them also parties to the Iran deal — reaffirmed their firm intention to stay in the agreement.
Russia and China have also repeatedly defended the deal.

READ MORE: US Should Abandon its 'Addiction' to Imposing Sanctions — Zarif

A second wave of sanctions targeting Iran’s energy sector is scheduled to come into effect November 4.