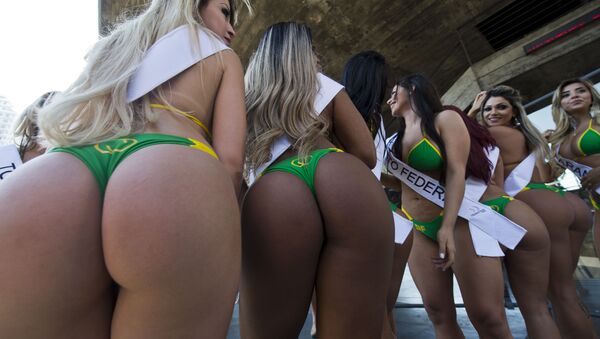 © AFP 2023 / NELSON ALMEIDA
Subscribe
International
India
Africa
The medical examination and subsequent photo session served not only as an “anti-cheat” for contestants, but also as a way to raise awareness about dangerous plastic surgeries.

The contestants of this year's Miss BumBum competition have posed in a hot photoshoot with X-ray pictures taken of their buttocks to prove that they are all competing fairly and that none of them has resorted to augmentation surgery to shape their sexy curves.

But at the same time, the sizzling photoset was aimed at raising awareness about the dangers of plastic surgery, in wake of a recent tragedy when a woman died hours after getting injections to pump up her buttocks.

Denis Furtado, also known as Dr. BumBum, who conducted the operation, fled the city after the incident, but was caught 4 days later by the police. It is alleged that he accidentally struck the artery, injecting it with fillers during the procedure.

This is not the only case where plastic surgery has gone fatally wrong, as 24-year-old Brazilian model Mayara Silva dos Santos died due to complications from her plastic surgery conducted in Rio. British woman Jade Stafford was a bit luckier, barely surviving the buttocks enlargement in March in a bid to get a backside like Kim Kardashian's.