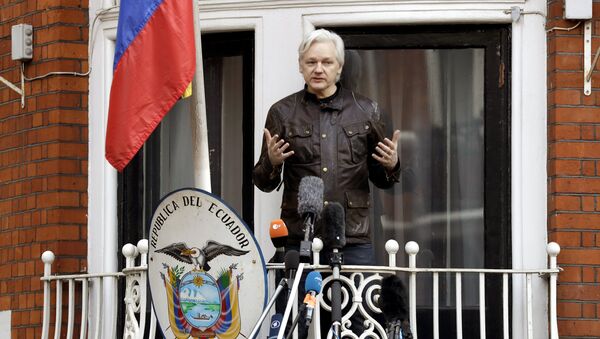 WikiLeaks published documents taken from the server of the Democratic National Committee by unknown hackers, allegedly affecting the outcome for then presidential hopeful Hilary Clinton. The US Senate is looking into allegations that Russian hackers were behind the leak.

The US Senate Intelligence Committee has called WikiLeaks founder Julian Assange to testify in the case on alleged Russian meddling in the 2016 US presidential election in a closed interview, WikiLeaks said in a tweet. According to the whistleblower organization, the letter containing the request was delivered via the US Embassy in London.

WikiLeaks' legal team was cited in the tweet saying that it is currently considering the offer from the US Senate Committee, but noted that the process of giving a testimony needs to "conform to a high ethical standard."

BREAKING: US Senate Intelligence Committee calls editor @JulianAssange to testify. Letter delivered via US embassy in London. WikiLeaks' legal team say they are "considering the offer but testimony must conform to a high ethical standard". Also: https://t.co/pPf0GTjTlp pic.twitter.com/TrDKkCKVBx

Just minutes after publishing the request from the Senate, WikiLeaks' Twitter account also published a list of Democratic senators who have demanded that Assange's asylum in the Ecuadorian Embassy be revoked, where he is hiding for fear that he might be extradited to the US by the UK for his previous "revelations."

Democratic Senators who demanded today that @JulianAssange's asylum be revoked in violation of international law. Remember them. pic.twitter.com/L63Hy9L1wo

In May, Assange's long-term associate Randy Credico said that the WikiLeaks founder was ready to testify in the case.

US authorities have accused Russia on multiple occasions of interfering in its 2016 presidential election, which Moscow firmly denies. In 2016, amid the ongoing election campaigns, WikiLeaks published thousands of documents stolen from the DNC's servers and the personal emails of Clinton's campaign manager, John Podesta.

The US accused Moscow of leaking the documents to WikiLeaks in order to influence public opinion and help Trump get elected. However, in 2016 Assange denied the allegations, saying that Russia was not the source of the leaked emails.