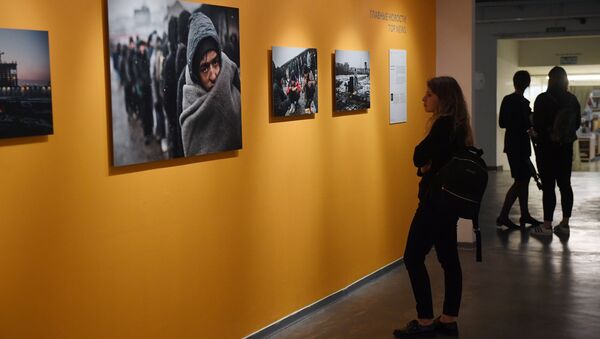 Sadegh Souri, an Iranian photojournalist who won the "Portrait. A Hero of Our Time" category with his "Victims of smuggling" series has talked to Sputnik about the importance of photojournalism today.

Sadegh Souri: For several years (2013 —2017) I worked in one of Iran's most dangerous areas — the country's border with Pakistan. This is a very poor area, and after the draining of the Hamun River many local farmers ended up unemployed and without any money. They were forced to take up criminal activities to make a living — they were selling gasoline and other fuel to Pakistan. Many of them fell victim to this dangerous job and were seriously injured.

I have traveled to about 300 villages, and everywhere there were about 5-6 witnesses to fuel smuggling. Few of those I saw let me take a picture of them. Most people were afraid that this would lead to their arrest.

Winner of 2017 Stenin Photo Contest: 'We Need to Go Out and Tell Our Stories'
While working, I had to risk my life to take pictures of fuel smugglers. The so-called ‘zero border zone,' where anything could happen to you, was particularly dangerous. I was detained by border guards three times, but this wasn't due to any problems with my press card or other documents. They were simply afraid for my life. In the zone, smugglers often used weapons, and threatened us with death, not allowing us to take a photo.

Some stories, even the most dangerous ones, are thrilling and photojournalists become so into this business that they can easily risk their lives. However, we need to understand that photojournalism is very important. This is something that can change the minds of people and politics regarding some acute problems.

It can change the world for the better. Remember that sad photo of a dead Syrian boy on a Turkish beach. But for this photo, the problem of Syrian refugees wouldn't have been given so much attention from the EU and other institutions; and the EU wouldn't have opened its borders to refugees.

Souri also highly appreciated the Stenin photo contest's format and organization. According to him, the competition is the most professional in the world:

Sadegh Souri: I've taken part in different photo-festivals, but the Stenin Photo Contest is the most professional in the world. My participation and my victory greatly influenced my career and took me to the next level of photojournalism. What's notable in this competition is that very well-known professionals from various magazines and periodicals take part in it, and the jury is super professional.

Actually, these people make it worth participating in the contest to get a professional assessment. Moreover, the competition gives the world a chance to see the reality of what's going on in the world.

Views and opinions expressed in this article are those of Sadegh Souri and do not necessarily reflect those of Sputnik.