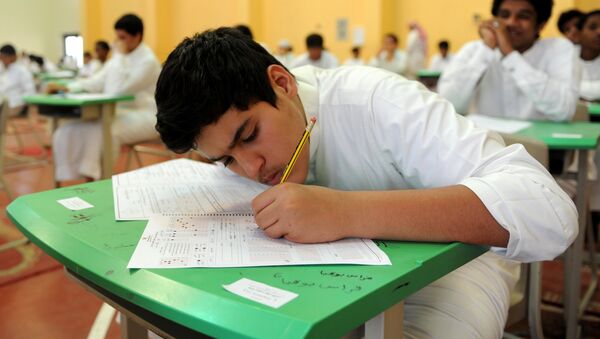 Riyadh is suspending all joint education programs with Canada and moving its students studying in the country elsewhere, after the kingdom abruptly cut ties with Ottawa over criticism of its jailing of rights activists, Al-Arabiya TV reported on Monday, citing a pertinent decision made by the Saudi government.

There are more than 15,000 Saudi students currently studying in Canada, including 800 already working in the country in medical and other professions.

Plans to relocate Saudi students and their families in Canada to other countries, primarily the United States and Britain, were already underway, education ministry official Jassem al-Harbash said.

Ireland, Australia, New Zealand, Japan and Singapore are also on the list of potential destination countries, he added.

In an interview with Sputnik, Feisal al Dawsari, a Saudi student living in Canada, said that he welcomed the decision to break off ties with Canada.

“I have already sent out applications to universities in other countries and I’m now waiting for their response. I have also booked plane tickets for myself and my family to get back home, just like my Saudi friends did,” Feisal added.

On Thursday, Canada’s Foreign Affairs Minister Chrystia Freeland  said that she was “deeply concerned” to learn that human rights activist Samar Badawi, the sister of imprisoned Saudi writer Raif Badawi, had been jailed by Saudi authorities.

Raif Badawi was arrested in 2012 and sentenced to 10 years behind bars for criticizing Muslim clerics and the country’s religious police. He was also accused of insulting Islam and of committing cybercrimes. His wife and their three children currently live in Canada.

The Saudi foreign ministry responded to Freeland’s statement by recalling its ambassador from Ottawa, declaring the Canadian envoy to the kingdom a persona non grata and giving him 24 hours to leave the country.

Riyadh also froze all new trade and investment contacts with Canada, suspended all joint educational programs and announced that Saudi students would no longer be going to study in Canada.

000000
Popular comments
Good on you Canada ...about time someone stood up to their (Saudi) appalling human rights records.
astrodetective
7 August 2018, 17:28 GMT2
000000
The recent dispute between Canada and Saudi itself is not extraordinary but the US's refusal to take sides in the matter is contradictory to like instances. In addition, the State Department made its first comments and the Trump administration issued its first statement on the matter nearly 24 hours later. Canada called on Saudi to release two arrested human rights activists, which sparked an outrage from Saudi that it's a violation of its sovereignty [for Canada to interfere in is internal matters] and led to the recall of the Saudi ambassador to Canada and the expulsion of Canada’s ambassador in Saudi. I agree with Canada to call out Saudi for arresting two human rights activists. BUT, the US placed Turkey and other countries like Cuba et al. under sanctions for doing the same thing. The US encroaches upon and interferes in every country's internal affairs and suddenly ... the US is distancing itself from similar matters that create huge ruckuses ?? www.yahoo.com/news/state-department-saudi-arabia-canada-215347088.html
Elsa JV
7 August 2018, 20:01 GMT1
000000
Newsfeed
0
New firstOld first
loader
LIVE
Заголовок открываемого материала
Access to the chat has been blocked for violating the rules . You will be able to participate again through:∞. If you do not agree with the blocking, please use the feedback form
The discussion is closed. You can participate in the discussion within 24 hours after the publication of the article.
To participate in the discussion
log in or register
loader
Chats
Заголовок открываемого материала
Worldwide
InternationalEnglishEnglishMundoEspañolSpanish
Europe
DeutschlandDeutschGermanFranceFrançaisFrenchΕλλάδαΕλληνικάGreekItaliaItalianoItalianČeská republikaČeštinaCzechPolskaPolskiPolishСрбиjаСрпскиSerbianLatvijaLatviešuLatvianLietuvaLietuviųLithuanianMoldovaMoldoveneascăMoldavianБеларусьБеларускiBelarusian
Transcaucasia
ԱրմենիաՀայերենArmenianАҧсныАҧсышәалаAbkhazХуссар ИрыстонИронауОssetianსაქართველოქართულიGeorgianAzərbaycanАzərbaycancaAzerbaijani
Middle East
Sputnik عربيArabicArabicTürkiyeTürkçeTurkishSputnik ایرانPersianPersianSputnik افغانستانDariDari
Central Asia
ҚазақстанҚазақ тіліKazakhКыргызстанКыргызчаKyrgyzOʻzbekistonЎзбекчаUzbekТоҷикистонТоҷикӣTajik
East & Southeast Asia
Việt NamTiếng ViệtVietnamese日本日本語Japanese俄罗斯卫星通讯社中文（简体）Chinese (simplified)俄罗斯卫星通讯社中文（繁体）Chinese (traditional)
South America
BrasilPortuguêsPortuguese
NewsfeedBreaking
12:52 GMTSeparate Bill Introduced in US Congress Pushes $1 Bln Funding for Israel's Iron Dome Defence System
12:24 GMTRussia's SCO Envoy Says Taliban Recognition Not on Agenda, While Dialogue is Important
12:12 GMTLava Flow Destroying Settlements Forces Evacuation as La Palma Volcano Continues to Erupt
12:10 GMTUNSC Discussing Security and Climate Change
12:08 GMTBalls to the Wall: Oklahoma Man Gets 12 Years in Prison for Failed Castration of Volunteer
12:02 GMTThe Spy Who Abused Me: Director of Latest Bond Movie Calls Sean Connery's 007 a 'Rapist'
11:56 GMTIt's a Gas!... Russia Blamed for Europe's Fuel Crisis
11:45 GMTWhen It Rains, It Pours: UK Defence Ministry Reportedly Allows Another Afghan Data Breach
11:40 GMTMan United Players Frustrated as the Team Out of Carabao Cup After Stunning Loss to West Ham
11:01 GMTPoland to Deploy 250 US-Supplied Abrams Tanks on Eastern Border, Defence Minister Says
10:50 GMTGerman Greens Leader Accuses Russia of Exacerbating Gas Crunch
10:38 GMTRIP 'Godfather of Black Cinema': Filmmaker Melvin Van Peebles Dies at 89
10:28 GMTBoris Johnson Reveals Why He Wants to Be Renamed in Honour of Ancient Greek God of North Wind
10:22 GMTHis Royal Highness No More? UK Queen Could Strip Prince Andrew of HRH Title Amid Sex Assault Case
10:02 GMTJohnny Depp Says No One is 'Safe' From Cancel Culture as He Hints That 'MeToo' Got Out of Hand
09:51 GMTPutin, Zelensky to Meet When Both Are Ready, Kremlin Says
09:49 GMTMarseille Football Team Blames Mass Brawl of Spectators on Provocation by Angers Fans - Video
09:31 GMTGeneva to Host New Round of Russian-US Strategic Stability Talks Next Week, American Ambassador Says
09:24 GMTUS House Committee Approves Amendment Recommending Sanctions Against Russian Officials
09:23 GMTSCO to Coordinate Effort to Prevent Threats Coming From Afghanistan, Russian General Staff Says