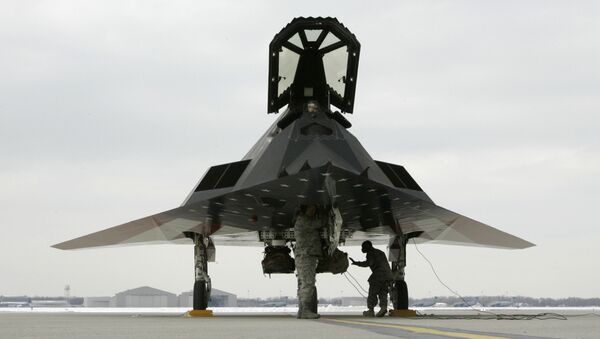 Two retired F-117 Nighthawk aircraft have been spotted flying over Nevada airspace, and the lack of a clear explanation for their flights has sparked curiosity among US aircraft observers.

The planes took flight from Tonopah Test Range, Nevada, and conducted a refueling session with a KC-135 as the tanker orbited around the restricted airspace, Tyler Rogoway wrote July 30 in article for the Warzone. The F-117 aircraft known by call signs Night 17 and Night 19 appeared in a YouTube video published July 27 by "pdgls." Night 17 flew a test mission, while Night 19 returned to the airfield after tanking, according to the video description.

The jets were reportedly laid to rest as part of the 2017 National Defense Authorization Act. "In accordance with the National Defense Authorization Act of 2017, passed Dec. 23, the Air Force will remove four F-117s every year to fully divest them — a process known as demilitarizing aircraft," Oriana Pawlyk wrote in a report for Defense Tech last year, citing a defense official.

The remaining F-117s sit in a storage facility in Tonopah, Nevada, where low humidity mitigates the risk of corrosion. "We had to keep all the F-117s in flyable storage until the fiscal '17 NDAA gave us permission to dispose of them. Once we have it, [Congress] doesn't let us to get rid of anything, but do it in phases, like keep it in backup inventory, primary aircraft assigned or flyable storage," the official told Defense Tech, referring to the technical steps involved in the disposal process.

The aircraft have been in the technical categorization known as "flyable storage" aircraft, the official said. As such, these planes aren't classified, and aircraft enthusiasts have been able to spot them taking flight.

According to a report by the Aviationist, the planes have been in "Type 1000" storage since 2014, which means they have to be maintained and ready in the event they are called into active service.

Some pilots like to fly the planes to keep them airworthy, the Aviationist reported, but the pilots are, "according to most sources, not US Air Force aircrews but Lockheed Martin/contractor pilots."

According to audio documentation, the Night 17 pilot changed call signs to Dagger 17 after practicing an emergency disconnect from the KC-135 tanker. "It's a considerable effort for just a routine mission of a pair of preserved aircraft," the Aviationist noted.

The Aviationist report says it's an open-ended question as to what Dagger 17 was doing.

"Needless to say, the reason for the F-117 flights remains a mystery. Whilst the pretty basic pattern activity carried out by Night 19 is coherent with a periodic flight required to maintain currencies and airworthiness certificates, the seemingly more complex stuff conducted by Night 17 after it changed call sign to Dagger 17 seems to suggest there is some more interesting work for Black Jet."

The aircraft could be involved in a range of potential support and development missions, including testing of sensors designed to detect stealth aircraft, testing systems for use on the nascent B-21 Raider or testing upgrades for the F-22 Raptor and F-35 Joint Strike Fighter, according to US media reports.