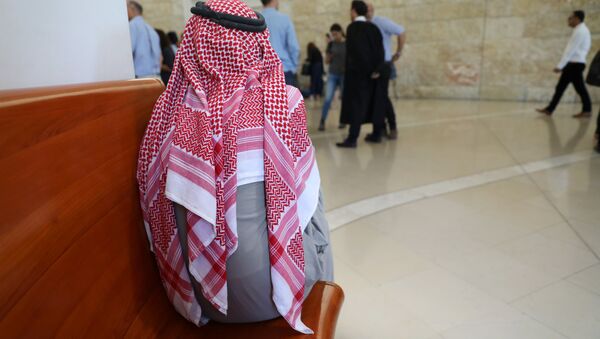 MOSCOW (Sputnik) - A group of prominent Israeli Arabs, including members of the Israeli parliament — Knesset — has submitted a petition to the Israeli Supreme Court protesting against the recently adopted "Jewish nation-state" law, which they claim to be violating human rights, the Times of Israel newspaper reported on Tuesday.

"[The law is] racist, massively harmful to fundamental human rights and contravenes international human rights norms, especially those forbidding laws that constitute a racist constitution… Any law that denies Palestinians their civil and national rights is racist, colonialist and illegitimate," the petition said, as quoted by the outlet.

The newspaper added that the nation-state law had been adopted as basic law, meaning that it would be harder to repeal it, compared to an ordinary law.

READ MORE: A New Bill May Boost US Military Aid to Israel to More Than $3.8 Bln — Reports

The outlet added that three petitions had already been filed to the Supreme Court demanding to repeal the law as unconstitutional.

Thousands of Israelis Protest New Law That Makes Arabs ‘Second-Class’ (PHOTOS)
The law has been widely criticized at the international level as well, with the Russian Foreign Ministry saying that it was hampering international efforts aimed at resolving the long-standing conflict between Israel and Palestine and Turkish President Recep Tayyip Erdogan calling Israel the "most fascist and racist state" in the world.

The law, which was passed by Knesset in July, stipulates that only Jews living in the country have a right to self-determination while Arabs, who make up about 20 percent of the country's population, have been deprived of the same right. The law also declares Hebrew the only official language with Arabic losing the statues and becoming a language with a "special status."