From 1945 to 1963, the US military tested nuclear weapons above ground in the deserts of Nevada and New Mexico, pouring huge amounts of radioactive materials into the atmosphere. A new study about “Trinity,” the first test in July 1945 in central New Mexico, will be published in 2019, the National Cancer Institute has announced.

Michael Levin, a spokesperson for the institute, which is part of the National Institutes of Health (NIH), told The Associated Press Tuesday that the study should be concluded by early next year.

The Trinity Test was the world's first man-made nuclear explosion, detonated on July 16, 1945, in the Jornada del Muerto region of New Mexico. The test was to confirm that the design for a terrible new weapon, one that could destroy entire cities in a single explosion, could actually work. Trinity's success gave the US military the go-ahead to use the weapon in combat, which it did several weeks later when it destroyed the Japanese city of Hiroshima on August 6. A second weapon was used on August 9 against the Japanese port city of Nagasaki; together the two bombs killed an estimated 225,000 people.

The Trinity explosion created a blast equivalent to roughly 20,000 tons of TNT. 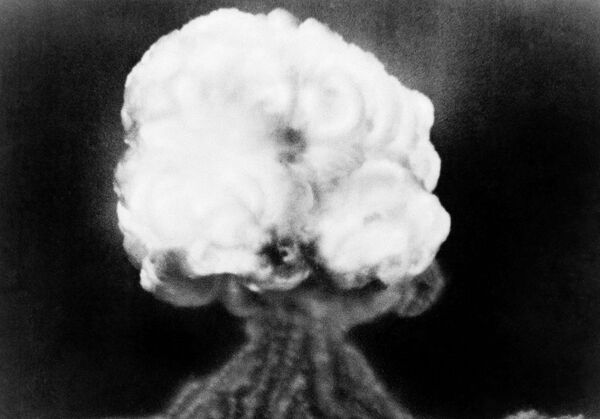 "It was a dirty test to be sure," Greg Mello, executive director of the Los Alamos Study Group, told Sputnik Tuesday about the Trinity blast. "Heavy fallout doses were incurred on isolated ranches and some on small towns as well."

The nuclear bomb that was tested drew its power from a process called nuclear fission, in which the atoms of unstable, radioactive elements are purposefully split by an explosion, which generates a chain-reaction that releases colossal amounts of energy. The most common fuels for such weapons are uranium and plutonium.

The resulting explosion irradiates land for miles around, making everything radioactive. As the radioactive dust gets thrown miles into the sky or blown around by the wind, it can travel thousands of miles from the explosion's "ground zero." That radiation can cause cancer, birth defects and a host of other health problems. In sufficient doses, radiation can be deadly.

As a consequence, nuclear tests are often performed underground or high in the air, where the risk of fallout is minimized. However, in the early days, nuclear bombs were detonated like normal bombs, only a couple of feet above the ground, sending huge amounts of radioactive dust into the sky.

In late June, Navajo Nation Vice President Jonathan Nez and Tina Cordova, co-founder of the Tularosa Basin Downwinders Consortium, testified before Congress about the effects of the test on their communities.

Descendants of those affected, mostly Latinos and people from the state's many indigenous nations, are hoping the results of the study will advance their movement to win compensation for the effects of the nuclear testing via the Radiation Exposure Compensation Act.

Previous studies have proven the disastrous effects of open-air nuclear testing in the United States: a huge increase in stillbirths and cancer rates across the country, but felt most acutely by the so-called "down-winders," the people who lived in the shadow of the huge nuclear blasts.

In turn, the federal Radiation Exposure Compensation Act, passed in 1990 and expanded in 2000, has compensated many of those immediately affected by nuclear weapons testing, but only provides for downwinders associated with the much more heavily used Nevada Test Site, not the Trinity Test site. The US government has paid out over $2 billion in compensation through the act, Quartz noted.

In 2015, Sen. Tom Udall (D-NM) advocated for inclusion of affected New Mexicans and indigenous people into the law, AP noted.

However, Mello cautioned that the government's recent acknowledgment of the effects of testing masks its long history of totally ignoring the problem. "Today's photo ops and feel-good hearings are designed by our congressional delegation to distract from their avid support for nuclear weapons in all their forms… The reputation of the bomb and the historical myth of its Manhattan Project ‘greatness' must be protected here in New Mexico especially to keep up political support for our state's two nuclear weapons labs, the best-funded in the world."

"These are not the only downwinders, of course," Mello said of the Tularosa basin consortium. A 2017 study by the University of Arizona found that radioactive fallout was responsible for an extra 340,000 to 690,000 American deaths from 1951 to 1973, after which the US signed the Threshold Test Ban Treaty, sharply limiting the size of underground nuclear tests.

One of the primary dangers comes from elements like strontium-90, an isotope produced only by nuclear testing, which the Environmental Protection Agency warns can be accumulated by plants growing in contaminated soil, and in turn, by animals that eat those plants. Livestock like cows and chickens can become a major vector for human consumption of that radioactive material via their milk, eggs or meat.

While the the Atomic Energy Commission tracked the clouds of nuclear fallout as they crossed the US following tests, it never issued any warnings and adamantly maintained that radiation levels were ''well within safe limits," the New York Times noted in a 1986 article.

"Yet, in Utah farm animals died from radiation exposure, and human cancer rates near the test site increased tenfold," the NYT noted. "Plutonium was found in the soil in Salt Lake City, Denver and Houston. Stillbirth rates in New York showed increases in 1954, 1956 and 1959 — the years following intensive testing."

Likewise, residents downwind of the Trinity blast weren't informed about the test until after the war was over, AP noted, and descendants say they've suffered from rare forms of cancer for generations as a result.

The NCI told AP it hopes to release the study's findings to the descendants before its publication, if the publishing journal's policy allows.