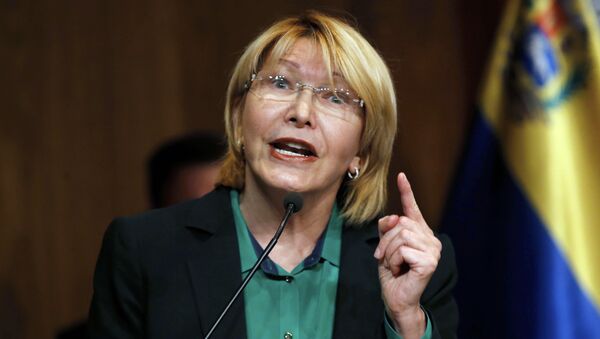 © AP Photo / Ariana Cubillos
Subscribe
International
India
Africa
Sacked Venezuelan Prosecutor General Luisa Ortega Diaz on Monday rebuffed Caracas’ allegations of organizing the attempted assassination of President Nicolas Maduro, saying that if she really was behind the attack, it would have been successful.

“My fight with the tyranny is led only with the weapon that the law provides me. You, Jorge Arreaza and your chief Nicolas Maduro, well know that when I plan something, I do it well. If I was behind this plan, the country would be already celebrating its freedom. Stop lying,” the former prosecutor general wrote on Twitter.

On Sunday, Venezuelan Foreign Minister Jorge Arreaza accused Ortega Diaz as well as Colombian President Juan Manuel Santos, among others, of staging the attack on the president. The Colombian leader refuted the allegations.

WATCH: Video of Assassination Drone that Targeted Maduro Exploding
On Saturday, a military parade in the Venezuelan capital of Caracas attended by Maduro was interrupted by what the authorities said was an assassination attempt on the life of the president. A Venezuelan rebel group Flannel Soldiers claimed responsibility saying they had used two drones loaded with explosives. Maduro was unharmed, but seven soldiers sustained injuries.

Ortega was fired on August 5, 2017 after criticizing the election to a controversial Constituent Assembly as well as police brutality during anti-government protests, which have led to many deaths. The former official then fled to Colombia, where now she is under protection of the country's authorities.