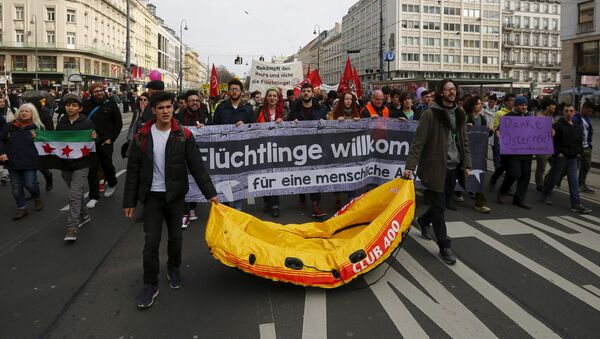 The influx of refugees from the Middle East in 2015 has resulted in significant friction in many European countries, as citizens increasingly express their displeasure at the need to spend tax money on migrants, as well as concern over security issues. This has led to growing support for right-wing parties across Europe, including Austria.

Aras Bacho, a Syrian refugee living in Austria, has suggested in an open letter published in the daily newspaper OE24 that ordinary Austrians and Germans should participate in the integration process of migrants. According to him, integration requires "both sides to work," meaning that Germans and Austrians should take refugees into their homes, as well as to live and go out with them.

"Austrians have to take refugees into their own homes — this benefits both sides. [Integration] works when refugees live with Austrians. They can talk, or an Austrian can read an official letter to a refugee and then explain it in simpler language. […] They can go outdoors or to a swimming pool together," Bacho wrote, adding that the same goes for Germans.

The man added that communication like that helps refugees to "get smarter" and learn the language. However, in his opinion, communication is not the only thing that Germans and Austrians can help migrants with.

He notes that taxes paid by citizens to support refugees are not donations, as they are mandatory. Bacho believes that Germans and Austrians should pay voluntary donations to be truly humane. He goes on to cite Jesus from the Bible to underscore his point.

"All Christians should naturally know that Jesus said 'give men in need your home and all your money.' As you can see, not all Christians adhere to this guideline," he said.

Bacho explained in his letter that money helped him a lot during his initial period as a migrant, buying not only clothes, but also books to learn German.

His ideas have found little support on social media, with responses ranging from flatly disagreeing with his views on integration to suggesting that Bacho should go and buy his own home back in Syria.

"Integration is not a one-way street. Both sides must contribute. To take someone is unilateral action and sends a wrong sign. Anyone who fails to integrate or assimilate within an existing framework does not belong here," a user named Henricvs wrote

"Every European should send such 'refugees' back to their own home," a user under the name of Frodilon wrote.

"As always so demanding, so outrageous, so ungrateful…" a user called snow crash wrote.

Still, there were some who supported Aras Bacho's suggestions.

"Unfortunately, this isn't going to work as many Germans are afraid of strangers. But every German should think about how well we're doing, how refugees have lost everything to live in safety, and help. It doesn't cost much," a user called Sisi61 wrote.

Germany, Austria and a number of other European countries faced a significant influx of migrants from the Middle East in 2015, which has led to public discontent and a rise in popularity of right-wing parties Europe-wide. A number of such parties have criticized their governments for their inability to halt the wave of migrants at the borders and for spending tax money to support refugees who do not work, do not pay taxes and sometimes don't learn the country's language.

The wave of uncontrolled migration has also led to public concern over the safety of ordinary citizens, as many of the states that accepted refugees have suffered from rising levels of crime, including rape, committed by some migrants. One of the more recent high-profile cases was the murder of 14-year-old Jewish girl Susanna Feldmann by 20-year-old migrant Ali Bashar from Iraq, who entered Germany in 2015.

Following a New Year's Eve celebration in Germany in December 2015, Cologne police received a total of 561 reports of robbery, threats and sexual assaults — largely committed by groups of people from Arabic and North African countries. Almost half of the reports had to do with sexual harassment. Information about the true scale of the problem during the festivities was revealed only after massive public pressure on authorities.