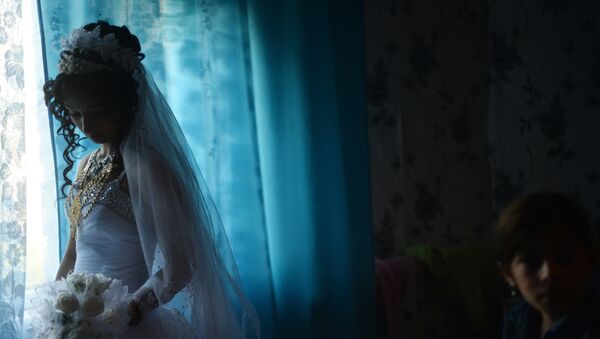 According to the human rights organization Fakti working with refugee and immigrant women, about a third of women who have received counseling admitted to living in a relationship where the husband has several wives.

Despite being illegal, polygamy is reportedly practiced by an unknown number of Muslims in Denmark, who sidestep the ban by entering Islamic marriage, which is not necessarily registered with the Danish authorities, the daily newspaper Berlingske reported.

"Polygamy is forbidden in Denmark, but it is being practiced nonetheless," Fakti head Lise-Lotte Duch said.

Social Advisor Ina Jensen estimated that up to 30 percent of the women counseled by Fakti admitted to being part of a polygamist relationship.

"Women say it's quite a common practice. Women believe it is the man's right according to Islam. But the subject is a taboo, because the women feel shame when the husband takes another wife," Ina Jensen explained. According to the women themselves, a man must take a second wife when the first one is unable to perform her duties in full.

Anita Johnson, who runs the guidance portal Ethnic Youth, said many Muslim women living in Denmark report that their significant others go to their respective home countries on a regular basis and are suspected of having another family there.

According to Anika Liversage, senior researcher in integration and gender equality at the Danish Center for Social Science Research (VIVE), polygamy is generally not frowned upon by women and typically happens under the radar. According to her, it is also not uncommon for men to exercise their marital rights with their former spouses that they refuse to divorce.

Liversage argued that the problem is that Islamic marriages aren't necessarily covered by Danish law, which makes it difficult to apply polygamy laws.

"It's difficult to legislate on something that has no legal validity. People can simply go out into the woods and get married according to the law of Odin and Thor," Liversage said.

According to Mohammad Khani, imam and teacher at the Imam Ali Mosque in Copenhagen, one of Denmark's largest,; the wedding ceremony doesn't legally require an imam and can be performed by the people themselves.

"We do not hide the fact that it is allowed to have up to four wives in Islam, but we also mention that you cannot be registered with more than one woman according to Danish legislation," Khani said.

Islam is Denmark's largest minority religion. According to a 2018 estimate, over 300,000 or 5.3 percent of the Danish population are Muslim. The figure has been rising over the past several decades.