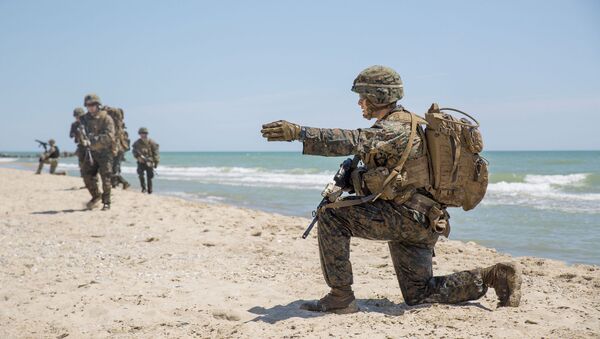 CC0 / /
Subscribe
International
India
Africa
State Department is considering deploying US Marines to the American Institute in Taiwan, the de facto US Embassy in this South Asian country. Yang Xiyu, senior fellow at the China Institute of International Studies think tank, told Sputnik that if taken, the step will be fraught with far-reaching regional repercussions.

Washington and Taipei do not have official diplomatic relations, so the American Institute in Taiwan (AIT) actually represents US interests in the island. The AIT's activities in Taiwan are informal and the security of the building is provided by the Taiwanese.

But in February, Stephen Young, former head of the AIT's Taipei office, said that US Marines will be deployed to a new AIT compound in Taipei to safeguard US personnel there.

Speaking to Sputnik, Yang Xiyu, senior fellow at the China Institute of International Studies, a think tank, pointed out that if US military personnel are stationed at the AIT, the move will "inevitably cause double consequences."

"First and foremost, the Taiwan issue is the most sensitive and contentious problem in Sino-US relations. Any actions to ignore the one-China principle will be a serious blow to bilateral ties. If the US Marines are deployed to the AIT, it will further deepen negative factors in relations between Beijing and Washington," Yang underscored.

He also referred to efforts by "Taiwan separatists" who are spending hefty sums and trying to encourage the US Congress "to raise the level of US-Taiwan relations".

READ MORE: China's FM Expresses Concern Over US Stance on Taiwan at Meeting With Pompeo

"The emergence of this problem [of a possible USMC deployment to ASIT] is just one of the results of these efforts," he noted.

Yang accused the Trump administration of using the Taiwan issue to stage "permanent minor provocations" against China, such as the participation of high-ranking US officials in the opening of the AIT.

"The US has repeatedly provoked China, testing its patience. If this escalation continues, it will lead to disastrous consequences for the situation in Taiwan," Yang warned.

READ MORE: New Defense Bill Seeks $7.5 Billion for Taiwan, US to 'Push Back on China'

He did not rule out that ever-increasing US clout in Taiwan may eventually result in external intervention there, something that would prompt the Chinese government "to use not only peaceful means to protect the sovereignty and territorial integrity of the state."

Yang's remarks came after an op-ed in China's The Global Times cautioned that if US Marines are sent to guard the AIT, Beijing will see it as a "severe subversion of the one-China policy," and "even an invasion of the US military on Chinese soil."

In late July, Chinese Foreign Ministry spokesman Geng Shuang said that Beijing is "extremely discontent" with the United States' plan to develop military cooperation with Taiwan and warns Washington against jeopardizing stability in the region.

READ MORE: A Pawn in Their Game? US Cozies Up to Taiwan, Angering China

In May, the US Senate Armed Services Committee published a report on next year's defense budget, which contained a section on strengthening military cooperation with Taiwan, including joint drills and arms sales. The relevant bill, which was already passed by the Senate, has yet to be approved by the House of Representatives.

Asia
‘Hottest Flashpoint in the Region’: Taiwan Wants US Tanks to Counter China
China considers self-governing Taiwan, which broke away in 1949 following the establishment of the People’s Republic, part of its territory and claims sovereignty over it. While business and unofficial contacts between the two sides resumed in the late 1980s, China refuses diplomatic relations with any country that recognizes Taiwan as a state.

The United States is among the countries which do not recognize Taiwan as an independent state. Washington declared it would end all political ties with Taiwan after a joint 1979 communique, but continued to maintain economic and cultural relations via the American Institute in Taiwan.

The views and opinions expressed by Yang Xiyu are those of the analyst and do not necessarily reflect those of Sputnik.